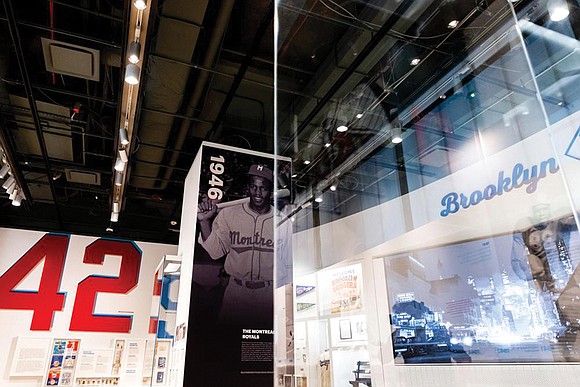 Tourists have a new “must- see” destination on trips to New York.

Cutting the grand-opening ribbons from her wheelchair was Rachel Robinson, Robinson’s 100-year-old widow.

Under direction of the Jackie Robinson Foundation, the project had been in the works for 14 years. There were numerous delays, most recently due to the COVID-19 pandemic.

The Foundation raised $38 million on its own. The City of New York contributed another $2.6 million.

Exhibits tell the story of Robinson’s illustrious athletic career, along with his contributions to fighting racial injustice.

Born Jan. 31, 1919, in Cairo, Ga. Robinson grew up in Southern California, where he became a four sport (baseball, basketball, football and track) standout at UCLA.

In 1945 he launched his pro baseball career with the Kansas City Monarchs of the Negro Leagues.

The next year he signed with the Brooklyn Dodgers, thus becoming the first African-American to join a mainstream team, the Montreal Royals. He joined the Dodgers on April 15, 1947.

Always an exciting baserunner, “Jackrabbit Jack” stole home 19 times in the regular season and once in the 1956 World Series against the Yankees.

Museum tickets are $18 for adults and $15 for students, seniors and children.