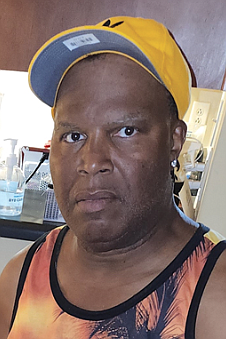 This Friday, the retired school custodian and former cook expects a Richmond judge to grant possession of his South Side apartment to the owner and landlord, who sought more than $3,000 in unpaid rent, legal costs and other expenses.

He emptied his savings to provide $1,800 but said he could not come up with the rest that included the August rent.

Once the judge delivers his verdict, Mr. Brown said he would have 14 days to move out or be removed by sheriff’s deputies.

He said he will not wait for the knock at the door. His belongings will go in storage, he said, and he will head out into an uncertain future with no firm idea yet of how to put a roof over his head.

“This is not how I envisioned my retirement going,” said Mr. Brown, a low-key, softspoken man known for his 17 years of serving as a fashion icon of 2nd Street during the annual October festival celebrating Jackson Ward.

“You work hard all your life to get to this point,” he said, and then “it doesn’t work out the way you want. Life can be hard.”

He is among thousands of Richmond residents who are facing court action from landlords for failing to pay their rent — including mothers with children and adults with serious medical conditions.

In an area where rents have soared and demand for units remains strong, those who do not pay for their housing are no longer able to avoid the consequences of missed rental payments, no matter how heartbreaking their story or how it impacts their lives.

Since March 2020 when the pandemic hit, renters have had major help to remain in place even if they stopped paying for their housing. The state and federal government halted evictions for the most part, and courts shut down.

Renters also got help when Congress passed major relief packages such as the CARES Act and the American Rescue Plan. Included were major appropriations of funds for rental relief.

Virginia, alone, was able to allocate $1 billion to use to pay past-due rent and also provide a three-month rental advance for lower-income residents who lost jobs.

But the ban on evictions has ended, and the rental relief funding has closed its doors to new applications. However, relief payments for those who made the deadline often remain hung up in in paperwork snafus.

When he went to court, Mr. Brown was shocked that the court room was packed with people who also were trying to fend off eviction. “There were just so many there,” he said. “It was so sad.”

For Mr. Brown, who has always paid his bills, his road to eviction began with health problems.

His asthma got worse and he developed heart problems. Now 62, he said that forced him retire in March from his job of maintaining a sterile environment at the Richmond-based United Network of Organ Sharing, the company that manages the donation and transplant system for kidneys, livers, hearts and other organs.

Then everything went South. He said he had to be hospitalized in May as conditions became more severe.

While he was able to qualify for Medicaid because he essentially had no money to take care of the medical costs, he could not make his June or July rent and found he could no longer apply for rent relief.

“Before that, I didn’t need it. When I did, the window was closed,” he said.

He had counted on receiving Social Security benefits after submitting his application, but it can take that agency four to six months to begin payments, and he said none of the pension money, about $1,100 a month, had begun flowing.

He said he also had hoped to fill the gap with money he was due from a settled civil suit. But that money remains tied up in a lawyer’s office, he said.

Earlier in life, as a foster child, he also was to receive a settlement from another accident case, but he said Social Services lost the paperwork.

He’s still optimistic. Despite his shaky health, Mr. Brown, who once was a top cook for the Tea Room at long-gone Miller & Rhoads store in Downtown, started applying for catering work that he hopes with the Social Security check will enable him to regain his financial footing.

“You can’t just give up. You have to keep positive and focus on solutions,” he said. “That’s the only way I can see to make it through this.”