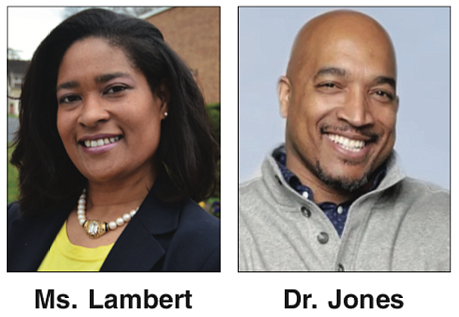 Two members of City Council will be seeking Richmond seats in the House of Delegates in the upcoming 2023 election cycle in which the 100 seats in the lower chamber as well as the 40 seats in the state Senate will be in play.

Third District Councilwoman Ann-Frances Lambert has confirmed she will run in the new 79th House District that runs from Bryan Park in North Side through Church Hill-Fulton and into the Manchester-Blackwell area of South Side in seeking to follow in the political footsteps of her late father, Benjamin J. Lambert III, who served in the House and Senate.

As the Free Press previously reported, Dr. Michael J. Jones, 9th Council District, already has declared his bid for the 77th House District, which includes parts of South Side and of Chesterfield County. He had planned but failed to make the ballot in 2021 to challenge incumbent Betsy B. Carr and has a chance to win what is now an open seat.

Both can run while holding their current posts as the next council elections will not take place until 2024.

The new districts they will seek to represent reflect the wholesale revamp of House and Senate districts that the state Supreme Court put in place last year to reflect population changes reported in the 2020 Census.

Use of the new maps with renumbered districts has been on hold until the upcoming elections after a lawsuit seeking to force legislative elections this year was dismissed.

Richmond is among the most affected by the new maps. Currently part of eight House districts, Virginia’s capital city will have only three representatives in the House in 2024, two of whom are virtually guaranteed to be new faces.

Richmond also will only have two state senators, rather than the current three.

At this point, according to the Virginia Public Access Project, Dr. Jones, a Democrat, is unopposed in the 77th District, though that could well change in the coming weeks and months.

Ms. Lambert, also a Democrat, saw an opportunity in the 79th after the current delegate, Delores L. McQuinn, decided that she would seek to represent the new 81st District, which includes Eastern Henrico, Charles City County and a small slice of Chesterfield County.

However, Ms. Lambert will face stiff competition for the coveted Democratic nomination that could be tantamount to election in the party-friendly 79th.

Rae Cousins, an attorney, already has announced her bid for the seat, while a third candidate, Richard W. Walker, founding chair and executive director for the felon support group Bridging the Gap in Virginia, said he plans to announce in January.

Delegate McQuinn said she decided to run in the 81st, which includes the Henrico portion of her current house district, as it encompasses the area where she grew up. If elected, she would no longer represent the city.

Democrat Terrence L. Walker, a Virginia Commonwealth University administrative assistant, already has announced plans to run for the seat, with voters likely to decide in next June’s Democratic primary who will represent them.

Meanwhile, three current Richmond Democratic incumbents, Delegate Dawn M. Adams, Delegate Jeffrey M. Bourne and Delegate Carr, are preparing to battle each other for the 78th House District seat, which largely includes the western half of the city stretching from North Side through South Side. The winner also is expected to be decided in next June’s Democratic primary.

At this point, two incumbent Richmond state senators, Ghazala Hashmi and Jennifer L. McClellan, are unchallenged, according to VPAP.

Separately, state Sen. Joe Morrissey, whose current district includes a chunk of Richmond, has announced plans to run in the 13th Senate District, which does not have any city precincts.

Both are Democrats, and their contest is another that would be decided in next June’s party primary.

Outside of Richmond, one of the most watched contests involves two veteran members of the Legislative Black Caucus, Sen. L. Louise Lucas of Portsmouth and Sen. Lionell Spruill Sr. of Chesapeake. Both have been forced to compete against each other for the 18th Senate District seat, with a decision to come as well in the party primary.