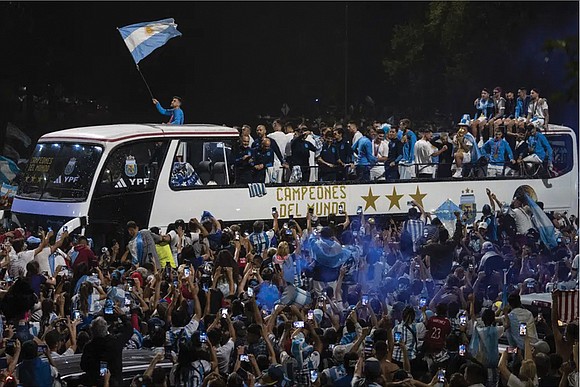 Argentina soccer fans crowd a highway for a homecoming parade for the players who won the World Cup title, in Buenos Aires, Argentina, Tuesday, Dec. 20, Photo by Associated Press

BUENOS AIRES, Argentina - A parade to celebrate the Argentine World Cup champions was abruptly cut short Tuesday as millions of people poured onto thoroughfares, highways and overpasses in a chaotic attempt to catch a glimpse of the national team that won one of the greatest World Cup finals of all time.

“The world champions are flying over the whole route on helicopters because it was impossible to continue by land due to the explosion of people’s happiness,” Gabriela Cerruti, the spokesperson for President Alberto Fernández, wrote on social media.

Argentina’s Lionel Messi celebrates with the trophy Dec. 18 in front of fans after winning the World Cup final soccer match between Argentina and France at the Lusail Stadium in Lusail, Qatar. Argentina won 4-2 in a penalty shootout after the match ended tied 3-3.

After flying over key points of Buenos Aires where fans had gathered, the helicopters returned to the headquarters of the Argentine Football Association outside the capital.

Some fans continued celebrating in the streets, while others headed out of Buenos Aires with long faces, complaining they were not able to pay their respects to the team that brought home the country’s first World Cup trophy since 1986.

“We’re angry because the government didn’t organize this properly so we could all celebrate,” said Diego Benavídez, 25, who had been waiting since early morning to see the team. “They stole the World Cup from us.”

Others, however, took it in stride.

“I’m not disappointed, we lived the party,” said Nicolás López, 33, who was in downtown BuenosAires with his 7-year-old daughter.

Football association head Claudio Tapia blamed law enforcement for the change in plans. “The same security organisms that were escorting us are not allowing us to move forward,” Mr. Tapia wrote on social media. “I apologize in the name of all the champion players.”

The bus had been moving at a snail’s pace for more than four hours through the throngs of humanity before the overland parade was cut short. Team Captain Lionel Messi and the rest of the players waved at the massive crowd as they carried the World Cup trophy aloft.

“This is madness, it’s indescribable,” said Brian Andreassi, 23, as he walked downtown wearing the team’s jersey. “There are no words.”

The World Cup and the success of the Messi-led squad brought much-needed good news for a country that has been stuck in economic doldrums for years, suffers one of the world’s highest inflation rates and where nearly 4 in 10 people live in poverty.