Carol Swann-Daniels, a trailblazer integrating Richmond schools in 1960, dies at 73 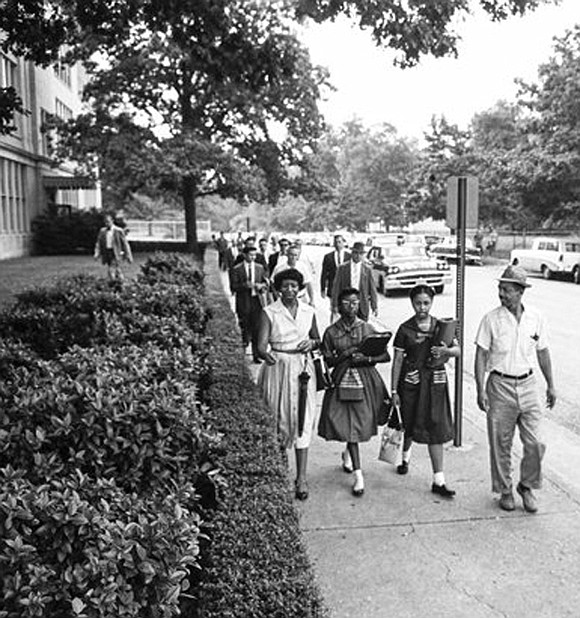 Carol Swann, right, and Gloria Mead are accompanied on their walk to Chandler Junior High School on their first day on Sept. 6, 1960, by Ms. Swann’s father, Frank Swann, and Ms. Mead’s mother, Florence Mead. News reporters and city police detectives also were at the school on the first day. Anderson Collection courtesy The Valentine

Sixty-one years have passed since Carol Irene Swann, 12, and her friend, Gloria Jean Mead, 13, blasted an opening in the racially segregated schools of Richmond.

With parental support and encouragement, the two young girls began blazing a trail for others when they integrated the previously whites-only Chandler Junior High School in North Side on Sept. 6, 1960, and ushered in change for Richmond.

That historic moment is gaining fresh attention following the death of the Carol Irene Swann-Daniels, a retired educator, on Valentine’s Day, Monday, Feb. 14, 2022, in New Brunswick, N.J. She was 73. 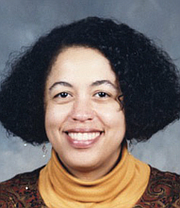 Her compatriot on that momentous day died in 1997 at age 50 at her home in Nigeria, where she moved after marrying.

The two were the first Black students admitted to an all-white school in the city, joining other brave young civil rights foot soldiers who integrated schools in other racially divided communities, mostly in the South.

Today, in an era when students of different racial and ethnic backgrounds can enroll in any public school, it is hard to realize how much courage it took for those girls to walk up the steps of the school building on Brookland Park Boulevard, now home to Richmond Community High School, and endure the physical and verbal abuse, insults and harassment in an attempt simply to get an education. At the time, it seemed akin to the Biblical Daniel entering the lion’s den.

They were treated as pariahs at the school and the next academic year at John Marshall High School, which they also desegregated in 1961.

“Football players would trip you in the hallways, and then you’d drop your books and when you’re picking them up, they’d say, ‘Look at the maid scrubbing the floor,’ ” Mrs. Swann-Daniels said during a videotaped interview about her experience. “They made paper airplanes and put pins in the end of them so if they flew around and hit you, then these pins would stick in you.”

At Chandler, no white student would sit near them. At John Marshall, the only white student who would, she recounted, was the late Vaughn Elizabeth Bolton, whose parents were mis- sionaries to Africa.

“Lunch was horrible because they would throw things like half-filled milk cartons that, when they hit you, they’d splash all over you. So after lunch, you would be really covered with food,” Mrs. Swann-Daniels said.

Other Black children would follow, along with lawsuits, busing mandates and new federal laws that would finally force Richmond to accept diversity in schools and the community, but the two girls suffered the slings and arrows of degradation in helping to make that happen.

Both heroines went on to significant careers.

Mrs. Swann-Daniels, after leaving Richmond to attend and graduate from Colby College in Maine, had a stellar career in New Jersey public schools, according to her family. She spent 15 years as a special education teacher, then became an expert in technology and spent the balance of her career equipping public schools with computers and other equipment before retiring in 2004.

Dr. Gloria Jean Mead Jinadu also achieved, ultimately becom- ing a social work professor at the University of Lagos in Nigeria and a publisher of religious books before her death.

Richmond has never recognized them for their heroism. No school buildings or streets are named in their honor, and their role in ending government-enforced, racial separation of school- children in Richmond is not taught in RPS history classes.

They proved their mettle six years after the landmark 1954 U.S. Supreme Court decision in Brown v. Board of Education had outlawed segregated schools. After five years of Massive Resistance by white people to the court order, Virginia found other ways to limit school integration. By 1960, Miss Swann and Miss Mead were among only 170 Black children enrolled in previously white public schools in the state, according to reports at the time.

Still the tumult of the Civil Rights Movement was being felt in Richmond. Just six months earlier, sit-in demonstrations were going on in Downtown in a bid to end whites-only service at restaurants. On Feb. 22, 1960, 34 Virginia Union University students were arrested for seeking service at the lunch counter at Thalhimers department store.

The two girls understood that they bore the hopes of thou- sands of Black families for a better education and an end to the overcrowded and poorly equipped schools their children were required to attend.

They also carried expectations to “show that Black people were smart,” Mrs. Swann-Daniels said in the video interview. “People that I didn’t know would come up ... and say, ‘We’re counting on you. You’ve got to show them.’ ”

After it was announced that the now long defunct state student placement board had approved them to attend Chandler, the Swann and Mead families were subjected to repeated hate-filled phone calls and their girls’ parents faced harassment at work.

While there were no crowds spitting and yelling at them when they entered the building as happened elsewhere, there was no escape from what Mrs. Swann-Daniels later described as “torture.”

No one would sit near them during assemblies; in gym class, they were given bright pink bowling shoes so that no white student would later wear them. They faced daily contempt and derision from classmates, Mrs. Swann-Daniels recounted.

When they entered high school, there was a third Black girl, Brenda Williams Jones, Mrs. Swann-Daniels recalled. The trio shared rides to school and stayed together in the halls.

Teachers and administrators weren’t particularly supportive, Mrs. Swann-Daniels said. One of her high school history teachers told the class that President Abraham Lincoln’s grant of freedom to Black people during the Civil War was a mistake.

Before her death, Mrs. Swann-Daniels expressed concern that the sacrifices she and her classmates endured did not result in greater progress.

“There was so much hope in the Black community that integration, at least in public school, would usher in a new day, that things would be different.

“I feel very discouraged,” Mrs. Swann-Daniels concluded. “We really pushed and pushed to get that rock up the hill, and now it’s going backwards.”

Survivors include her husband, Jeffrey Daniels of North Brunswick, N.J.; a daughter, Shaate Swann of Cherry Hill, N.J.; and a sister, Sharon Swann of Maricopa, Ariz.

Mr. Daniels said his late wife wished to be cremated and her ashes scattered off the coast of Nova Scotia, where they planned to live.

A memorial service may be held in Richmond at a future date, he said.