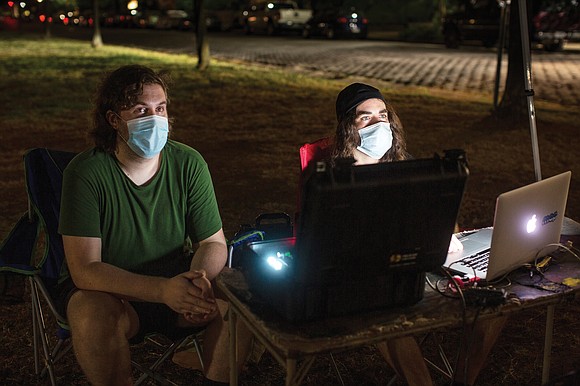 Richmond lighting artists Dustin Klein and Alex Criqui drew national attention 18 months ago in projecting the faces of Black thinkers, activists and victims of police violence nightly on the pedestal of the Lee monument on Monument Avenue.

The pair now has been awarded a $670,000 grant to support their initiative to create five similar major light shows this year at the African Burial Ground, Belle Isle and other city sites to highlight neglected, but significant historical, racial and social justice issues.

The award is from the Andrew W. Mellon Foundation’s Monuments Project, which has earmarked $250 million to support public projects that “more completely and accurately represent the multiplicity and complexity of American stories.”

Mr. Klein and Mr. Criqui, operating as the nonprofit Reclaiming the Monument, are at the foundation’s request teaming with The Valentine museum, which will provide archival photographs and manage the grant, according to William J. “Bill” Martin, director of the museum that focuses on Richmond history.

“There are important places all over the city. This project will bring new stories to light and encourage everyone to take a fresh look at our city’s history,” said Mr. Martin, who called it the kind of innovative effort The Valentine is proud to support.

“Richmond’s story is America’s story,” Mr. Martin continued, “and this grant from the Mellon Foundation provides an opportunity to elevate it.”

Mr. Martin said he hopes people will come out to view the temporary works as residents continue “to grapple with

the complicated legacies of our past and how its telling has been used to shape and influence our present and future.”

“It is our hope that by engaging our community with a more complete telling of our history through public art that we will be able to help our city heal and move toward a future rooted in peace, justice and equality,” said Mr. Criqui, who is creative director for Reclaiming the Monument.

Specific details are still being worked out on site locations and dates for the light shows, each of which will be on view for five to seven days.

In the summer of 2020, Reclaiming the Monument used light projections to feature on the Lee monument pedestal the faces of such Black luminaries as Dr. Martin Luther King Jr., W.E.B. DuBois and Harriet Tubman, as well as those of victims of police brutality.