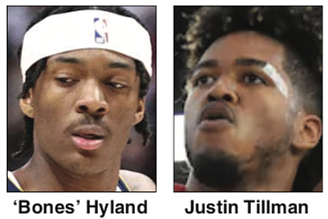 Coming off the bench for Denver Coach Michael Malone, Hyland is averaging 8.5 points, 1.8 rebounds and 1.7 assists in about 17 minutes per contest through 24 games.

On Dec. 18, former Rams player Justin Tillman signed a 10-day contract with the Atlanta Hawks. The 6-foot-8 native of Detroit went undrafted after averaging 19 points and 10 rebounds as a VCU senior in 2018.

Since then, Tillman has played professionally overseas in South Korea, Israel, Italy and Turkey, and most recently with the College Park Skyhawks, Atlanta’s G-League affiliate.

Tillman had played in the NBA Summer League with Miami and Philadelphia.

Making it to the top

Here is the list of former Virginia Commonwealth University players to reach the NBA along with seasons played and teams they represented:

• Marc Jackson played one season for VCU before transferring to Temple University and going on to play in the NBA from 2000 to 2007 with the Golden State Warriors, Minnesota Timberwolves, Philadelphia 76ers, New Jersey Nets and the New Orleans/Oklahoma City Hornets.