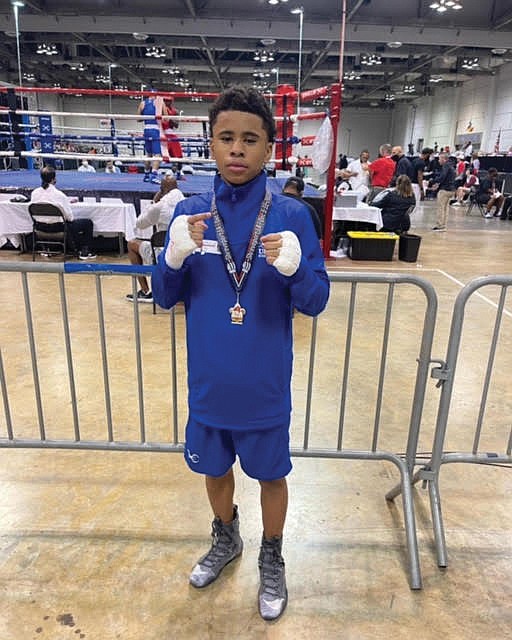 The eighth-grader at Hungary Creek Middle School in Western Henrico County has won so many national boxing titles that he can no longer count them all on one hand.

Andre recently added a sixth consecutive crown in the 13-14 age, 101-pound class at the USA Boxing National Championships in early December at the Shreveport Con- vention Center in Louisiana.

It was a single elimination event—lose and go home. Andre didn’t go home until he was the last young man standing.

Known as “Nino,” (meaning “little boy” in Spanish) due to his mother Alivia’s Latinx ancestry, the 5-foot-3 right-hander posted four straight victories by decision in Shreveport.

Asked what he enjoyed best about boxing, the youngster replied: “Winning. I love having my hand raised by the referee after winning a fight.”

“I had 10 amateur fights growing up in Toledo,” Mr. McCallum said. “But I was from the streets and didn’t have the backing to go very far. I’ve made sure my son has the backing.”

Andre has been here, there and everywhere on his young boxing journey that started during his early elementary school years. His overall record is in the vicinity of 90-10.

Because there are no qualified sparring mates in the area in his age class, the McCallums travel frequently to Washington and Maryland for in-ring punching sessions. Andre also learns by observation, courtesy of YouTube.

For such a young athlete, Andre packs a powerful punch of ambitions.

“I want to continue to build my skills and qualify for the 2028 Olympics—and come home with the gold,” Andre said.

The 2028 Olympic Summer Games will be held in Los Angeles. What better place for a boxer to have his hand raised in victory.