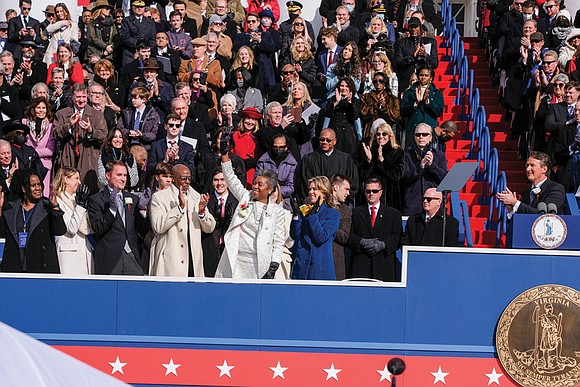 Lt. Gov. Winsome Earle-Sears stands and waves to the crowd as she is recognized by Gov. Glenn A. Youngkin during his inaugural address. The new governor reminded the crowd of the diversity of the state’s newly elected GOP leadership. Photo by Sandra Sellars

By 9:30 a.m. last Saturday, a line of people extended outside the gate of Capitol Square from 9th and Grace streets all the way to 8th street as they waited to be screened by Capitol Police and allowed to enter the inauguration of Gov.-elect Glenn A. Youngkin.

Terry Mullins, a white man wearing a red Make Virginia Great Again cap, was near the front when the gates opened. He’d traveled from Clintwood in Dickenson County, with his wife and daughter to witness the inauguration of the Commonwealth’s 74th governor.

“I’m here to share this wonderful moment with my family,” he told the Free Press.

Mr. Mullins said he voted for Gov. Youngkin, a Republican newcomer to politics and former private equity executive, not on any particular issues but because of “everything.”

The crowd gathered for the inaugural ceremony and festivities was largely white – and unmasked—despite the historic diversity of the incoming leaders, as Gov. Youngkin pointed out during the festivities.

Sheila and Kevin Adams, an African-American couple from Virginia Beach, stopped briefly on the walkway to greet another Black couple.

“I knew then and there that I needed to get behind this man,” said Mr. Adams, who served in the Navy for 26 years. He was wearing a baseball cap identifying him as a veteran of Operation Enduring Freedom.

“I could see that his wife was a wonderful Christian lady that genuinely loves people, and that’s what we need.”

Vivian and Kenneth Miller, the couple the Adamses stopped to greet, also talked about “Christian values” when explaining their support for the new governor.

“Mr. Youngkin offers a difference” from the previous administration, said Mr. Miller, a former police chief in Petersburg who is now serving as the interim chief in Colonial Beach. He said he views Gov. Youngkin as a potential defender of law enforcement.

“And he’s going to lead our Commonwealth the right way,” Mr. Miller said.

“Strengthen the Spirit of Virginia Together” was the inaugural theme, yet Christianity was in fact the only religion openly represented in the inaugural program despite the diversity of faiths in the state.

After students from the Governor’s School for the Arts in Norfolk gave an operatic rendition of “America the Beautiful,” Pastor Calvin A. Duncan of Richmond’s Faith and Family Church and a former Virginia Commonwealth University basketball star, delivered the invocation.

“Heavenly Father, we invite your presence to this 74th inaugural ceremony. Spirit of the living God, fall afresh on us. We ask for your peace, your protection, your guidance and your direction,” Pastor Duncan preached from the stage that had been set up next to the South Portico of the Capitol.

Behind him sat a relatively diverse array of guests when compared to the overall crowd. Among the dignitaries of color were former Democratic Gov. L. Douglas Wilder, honorary co-chair and an adviser to Gov. Youngkin’s transition team; Kay Coles James, one of three African-Americans named to Gov. Youngkin’s cabinet; Richmond Mayor Levar M. Stoney;

and several state lawmakers who are members of the Virginia Legislative Black Caucus.

Ms. James, who also served on former GOP Gov. George Allen’s cabinet, is now state secretary of the commonwealth in the Youngkin administration.

A Republican duo from the General Assembly, Delegate Christopher T. Head of Botetourt and Sen. John A. Cosgrove of Chesapeake, sang an arrangement of “The Star-Spangled Banner” to loud applause.

Cheers erupted after Gov. Youngkin, with his hand on the Bible, repeated the oath of office, which was administered by retired Virginia Supreme Court Justice Elizabeth A. McClanahan. Howitzers then blasted a loud salute and jets from the Virginia Air National Guard flew in formation overhead.

The new governor offered an inaugural address that was upbeat and filled with promises and optimism. But it also had its share of red meat and dog whistles.

“We will remove politics from the classroom and re-focus on essential math, science and reading,” Gov. Youngkin said. “And we will teach all of our history, the good and the bad.”

But shortly after the ceremony ended, Gov. Youngkin rolled out a list of executive orders, the first of which was to end “the use of divisive concepts, including Critical Race Theory, in public education.”

CRT, which is not part of Virginia’s public school curriculum, is a method of scholarly inquiry that examines the impact on our society of white supremacy and systems such as chattel slavery, Jim Crow, and voter suppression, from which generations of whites have benefited. Leading CRT scholar and Columbia University Professor Kimberlé Crenshaw says politicians and critics like Gov. Youngkin distort CRT and try “to use it to stoke fear and division.”

“It’s an effort to attach a term that people don’t know about to fears that they are fully in touch with,” she said in a recent post on the Association of American Law Schools’ website.

As the afternoon’s inaugural festivities wound down and the bleachers began to empty, members of Virginia’s Native American tribes performed a traditional ceremonial tribute to the new governor, lieutenant governor, attorney general and their spouses.

People of color also marched in the inaugural parade, includ- ing a group of Vietnamese American, African-American, and Latinx supporters of Gov. Youngkin.

At the very end of the parade, after the ATVs of Spearhead Trails and the brigade of horses from Oakland Spring Farms had passed by, 21 members of the Virginian Union University Choir who had performed during the inaugural ceremony sang a cappella a short original song for the new governor. Its refrain: “We’re Virginia. Strong Virginia. Love Virginia. One Virginia. We’re Virginia!”

While the stands had started to clear out, someone shouted to the choir, “Great job!”

During his campaign, Gov. Youngkin made stops at VUU and other HBCUs, including Virginia State, Norfolk State and Hampton universities. He pledged to give millions more in state funding to the schools.

“I’m cold,” one choir member said when asked how it felt to perform at the inauguration.