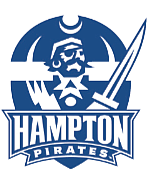 Many new schools are popping up on Hampton University’s football schedule.

The Pirates have changed conferences three times since 1995, resulting in a significantly different list of opponents.

HU begins this season as a full-fledged member of the Colonial Athletic Association (CAA), which is headquartered in Richmond’s West End. 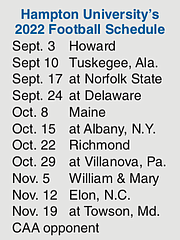 The CAA is a member of NCAA Football Championship Subdivision (FCS), the same as Big South and MEAC.

The Pirates, coming off a 5-6 record in 2021, will open against traditional op- ponent Howard on Sept. 3 at Armstrong Stadium. Next comes a home date Sept. 10 vs. Division II Tuskegee (of Alabama), then a trip across the Bay to longtime rival Norfolk State on Sept. 17.

After that, it’s mostly opponents that may be unfamiliar to older HU fans.

However, starting in 2023, a sense of the past may return when HBCU North Carolina A&T will join the CAA for football.