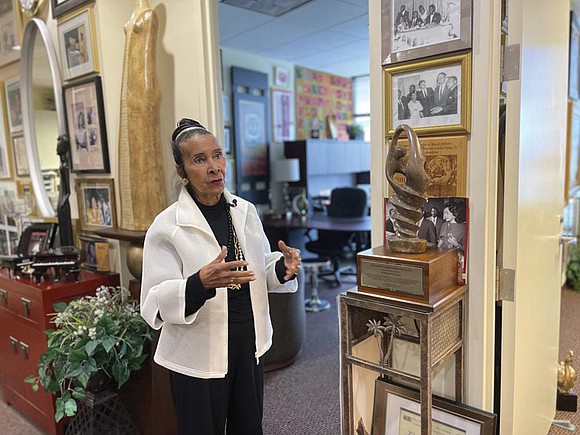 Xernona Clayton, a key aide to Martin Luther King Jr. and Coretta Scott King who helped sustain the civil rights movement in the 1960s, is interviewed June 3 in her offices at the Trumpet Foundation in Atlanta. Photo by Michael Warren/Associated Press

ATLANTA - A key aide to the Rev. Martin Luther King Jr. who helped sustain the civil rights movement in the 1960s says she’s deeply saddened by the hate crimes seeking to terrorize people across America.

But Xernona Clayton has been working for racial harmony since the movement began, and refuses to accept mass killings as routine. “We’re having too many racial conflicts,” Mrs. Clayton, 91, said recently in her office in Atlanta. “It’s so idiotic that we’ve had that racism in the first place. Because none of us had any say-so about how we got here.”

“My mind always goes back to what Martin Luther King would have said,” she said. “He always said, ‘You know, we CAN love each other.’ He said, “There’s just no reason why we can’t.’ And it was hard for him to understand why we don’t.”

In 1966, Mrs. Clayton learned that Atlanta’s Black doctors were restricted to one facility, Grady Hospital, and to just one day a week. “Wednesday was the day Black people would have their babies,” she recalled. “So I organized the doctors and told them, ‘We can do something about this.’”

She found a government ally who shared how much federal money was flowing to Atlanta’s segregated hospitals and took the doctors to Washington, scoring a White House visit. President Lyndon Baines Johnson had quietly encouraged such grassroots lobbying, and surprised her by insisting that hospitals nationwide had to desegregate before getting Medicare funding.

“I’m fearless, for the most part. You know, I’m not afraid to tackle an issue,” Mrs. Clayton said. “I’ll fight for what is right.”

In an era when national news organizations — including the AP — covered civil rights with all-white staffs, her friend Ralph McGill, publisher of the Atlanta Constitution, had her speak to a television industry convention. She took them to task for their hiring. Atlanta’s CBS affiliate WAGA responded in 1967 by making her the first Black talk show host in the South.

While King’s assassination only months later convulsed the nation, Mrs. Clayton and her guests provided audiences with a model for racial harmony. She even persuaded a Grand Dragon of the Ku Klux Klan to renounce the white terror organization. They too became friends.

Barbara Walters recruited her for a network role, but Ted Turner hired her instead to set a tone of inclusiveness at Turner Broadcasting Service, which launched CNN. She served for years as Turner’s corporate vice president for urban affairs.