Juneteenth doesn’t mark the end of slavery; ratification of the 13th amendment does, by DeWayne Wickham 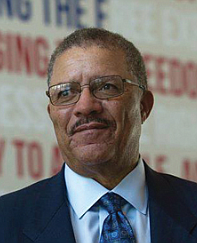 The day after the federal government announced that slavery in the United States had been officially ended, The New York Times published a front-page story that trumpeted this hard-won victory.

“Slavery Forever Dead in the United States,” the newspaper declared in one line of a four-tiered headline. Beneath it followed these lines:

It was Dec. 19 and a tumultuous year in the life of this nation was hurtling to a close. Thirteen days earlier, on Dec. 6, Georgia became the last state needed to ratify the 13th Amendment to the Constitution, which banned slavery throughout the United States and its territories. On Dec. 18, Secretary of State William H. Seward certified this result, officially ending slavery in every nook and cranny of this nation.

From beginning to end, 1865 had a sharp focus on slavery.

On Jan. 31 Congress passed and sent to the states for ratification the 13th Amendment; the Civil War ended on April 9, and President Abraham Lincoln was assassinated six days later. And for much of the year the nation struggled with what remained of the “peculiar institution“ of slavery, as backers of the 13th Amendment pushed to get 27 of the nation’s 36 states to approve its enactment.

Two years earlier, on Jan. 1, 1863, Lincoln issued the Emancipation Proclamation. It was a “war measure” that freed slaves throughout eight of the Confederacy’s 11 rebellious states, and in portions of two others – an action that was meant to chip away at the manpower they needed to support their economy.

One Confederate state (Tennessee) was excluded because it was totally under Union control.

In 1860 there were nearly 4 million slaves in this country, virtually all of them in the Southern states that broke away from the Union – and in the border states of Kentucky, Maryland, Delaware, Missouri, and West Virginia, that did not join the rebellion.

These border states, plus the parts of Virginia and Louisiana that were controlled by federal troops, also were exempt from the Emancipation Proclamation.

When federal troops under the command of Gen. Gordon Granger arrived in Galveston, Texas on June 19, 1865, Gen. Granger told slaves there that they had been freed by the Emancipation Proclamation. But he also “advised” them to continue to work for their “former masters.” Gen. Granger warned the newly freed slaves that any “idleness” on their part would not be supported by his troops.

How this limited offer of freedom to slaves in a Texas coastal town has become a federal holiday – a national observance of the end to America’s 246 years of enslavement of people of African descent – is a curious matter.

What happened in Galveston was hardly momentous. As with Blacks who gained their freedom in Washington, D.C.; Tennessee; Charleston, S.C; Vicksburg, Miss., and Coastal Carolina, freed slaves in Galveston marked their emancipation with an annual celebration.

But as with these other historical moments, what happened in Galveston on June 19, 1865, was simply part of a mosaic of small acts of manumission that preceded the 13th Amendment’s enshrinement of a nationwide ban on slavery into the Constitution.

Juneteenth doesn’t mark the end of slavery; ratification of the 13th Amendment does that. And it doesn’t signify the freeing of this nation’s last slaves. Slavery in Kentucky and Delaware didn’t end until after the 13thAmendment became law in December 1865.

A few days before the Civil War ended in April 1865, Frederick Douglass attended a meeting of the Massachusetts Anti-Slavery Society and offered this criticism of Union Gen. Nathaniel P. Banks who, while commanding troops in Louisiana, required freed slaves in Louisiana to sign year-long work contracts with their former masters.

Nothing that happened in 1865 brought slavery to a screeching halt. But the most important event then, if not as we look back at that year now, was the adoption of the 13th Amendment – not the small, misguided acts of manumission that preceded it.

So, why don’t we celebrate the day the 13th Amendment was ratified as Freedom Day?

DeWayne Wickham is a former USA Today columnist and founding dean of the School of Global Journalism & Communication at Morgan State University.