Juneteenth events had something for everyone

President Biden declared Juneteenth as a federal holiday one year ago. The holiday marks 157 years since soldiers in Galveston, Texas notified former slaves that they were free on June 19, 1865, two years after slaves in other states were freed.

Communities throughout Richmond celebrated the holiday by highlighting African-American culture and the importance of freedom. 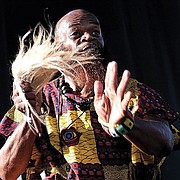 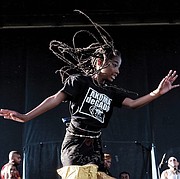 “My wife and I had COVID in January, so to come out here and celebrate something so significant is definitely refreshing,” Mr. Duffy said.

The Desiree Roots Ensemble performs “Lift Every Voice and Sing.”

“To watch everybody, celebrate is amazing,” Harmony said. “Juneteenth is great because it highlights everyone’s [collective] experiences.

Brayden agreed, saying he “felt relieved” that these events were able to happen again.

The City of Richmond hosted a three-day “Jubilation in June” event at Dogwood Dell, the 17th Street Farmers’ Market and Rocketts Landing.

Featured performers included the Legacy Band and the HamilTones, both R&B groups, along with local middle and high school students’ theater presentation “Journey to Freedom.”

Janine Bell, president of the Elegba Folklore Society, enjoyed Sunday festivities at Rockett’s Landing, and said she believed the weekend was for “commemoration.”

Ms. Bell will continue celebrating Juneteenth on June 26 at the Richmond African Burial Ground at 101 E. Broad Street from 4 to 9 p.m. General admission is $5 with children under 12 free.