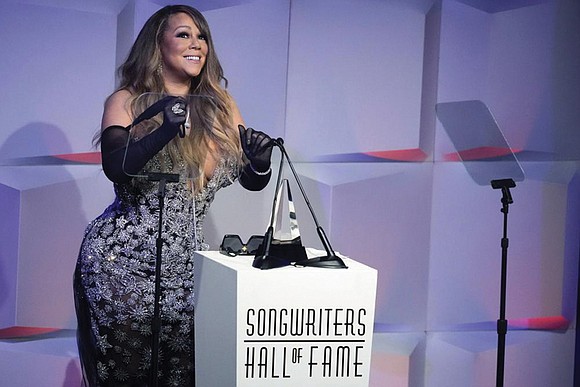 After a glittering career of No. 1 hits Mariah Carey was finally inducted into the Songwriters Hall of Fame on June 16, but not before challenging her new fellow members to do better by women.

“I read that out of the 439 total inductees into the Songwriters Hall of Fame, only 32 have been women, until now,” she said recently at the end of a four-hour celebration at the Marriott Marquis in New York. The line got a huge applause.

Songwriters are eligible for induction after writing hit songs for at least 20 years and the hall includes songwriters such as Burt Bacharach, Missy Elliott, Paul McCartney, Bruce Springsteen, Paul Simon, Billy Joel and Carly Simon. New annual slates are voted on by the membership.

St. Vincent kicked off the night with a blistering cover of Eurythmics’ “Sweet Dreams (Are Made of This).” She later came to the podium to recount the time she first caught a glimpse on MTV when a “beautiful, orange-haired androgynous creature appeared wearing a suit and tie.”

Lil Nas X was honored with the Hal David Starlight Award, which recognizes “gifted young songwriters who are making a significant impact in the music industry via their original songs.” He accepted his award wearing a white tuxedo and a mob of frizzy blond hair, tweaking the usual acceptance speech: “Thank you to my imaginary husband and kids,” he said.

Representing the Isley Brothers, were Elaine Isley Goodstone, Ernie Isley and Ronald Isley. Ernie Isley reminded the guests that their early hit “Shout,” was recorded 63 years ago and their music would go on for decades, prompting the Beatles to cover them. The two men then performed a medley of hits that included “That Lady,” “It’s Your Thing” and “Between the Sheets.”

Jimmy Jam and Terry Lewis introduced another songwriting duo — Pharrell Williams and Chad Hugo who, as the Neptunes, shaped pop and urban radio from the 1990s well into the 2000s by creating hits for Britney Spears, Jay-Z, Justin Timberlake, Usher and Beyoncé.

Mr. Williams gave advice to up-and-coming songwriters, warning them that the music industry was an often dangerous place. “Life is like Legos. Songs, like life, are put together piece by piece,” he said. “If you build a really strong foundation, you won’t fall.”

Questlove introduced Ms.Carey and regretted that all too often her songwriting chops were often overlooked. With 19 No. 1 hits on the Billboard Hot 100 chart, she is only behind The Beatles, he reminded the crowd that she did it as a Black woman. “Success at this level, especially for Black artists, is a real obstacle course,” he said.

Ms. Carey said a dysfunctional background prompted a dark vision of the world as a 6-year- old, so music and melodies and lyrics were her escape. She said she always has to remind people she’s a songwriter first, but the diva label seems to stick more. She left the crowd revved up for a performance but other artists came on stage to sing a medley of her songs, including “Fantasy,” “Hero,” “Make It Happen” and “We Belong Together.”