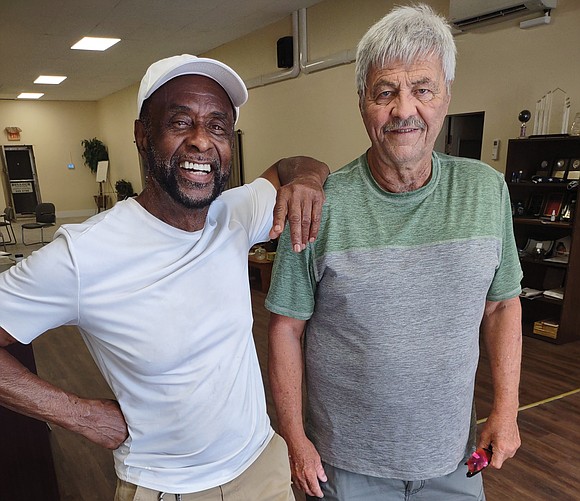 William “Junie” Bullock, left, was a Richmond firefighter for 18 years, during which time he heroically rescued several residents from the ninth floor of the Boxwood Building at Imperial Plaza on Bellevue Avenue. The 79-year-old Richmond native has never been recognized for his heroics on June 11, 1978. He shares memories of that day with retired firefighter Jack R. McIntyre, 72, who was driving the Company 46 ladder truck that enabled Mr. Bullock to gain entry to the top floor of the building. Photo by Jeremy Lazarus

As the firetrucks roared up, an elderly woman was screaming for help out of a half-open window as smoke billowed around

her. She would be the first person that firefighter William“Junie” Bullock would rescue that day from the ninth floor of the Boxwood Building at Imperial Plaza, a five-building complex for retirees located on Bellevue Avenue in North Side that had opened 11 years earlier.

In pitch-black conditions, he would single-handedly lead another 11 trapped people to safety 44 years ago in one of the great rescues in the annals of the Richmond Fire Department.

The 79-year-old Richmond native, who left the department after 18 years to start a painting company that he continues to operate, has never been recognized for his heroics on June 11, 1978.

“At the time, you were lucky to get a pat on the shoulder or an ‘attaboy,’ but no one handed out medals,” said retired firefighter Jack R. McIntyre, 72, who was driving the Company 46 ladder truck that enabled Mr. Bullock to gain entry to the top floor of the building.

The emergency began around 7:15 a.m. when a kitchen fire broke out in apartment 808 that sent thick smoke billowing through the hallways of that floor and the one above, according to a newspaper report at the time.

While the fire was contained to the apartment, the smoke would kill one resident and send 14 others to two area hospitals for treatment.

Driving up to the scene, Mr. McIntyre spotted the screaming woman in a corner unit on the 9th floor and at the direction of Mr. Bullock drove onto the lawn by the parking lot which had a rise, miring the wheels into an area made soggy by recent rains.

With the building set into a valley, Mr. McIntyre said that the only hope to get the 100-foot ladder to her window was to get on a high point.

With an air-pack strapped on, Mr. Bullock said he went up and found the ladder had cracked the window so he was able to knock out the glass with his helmet. That allowed him to get inside to help the woman. Before leaving, she urged him to help her neighbor.

Behind Mr. Bullock came the third firefighter on the truck, Ernest Logan, now deceased, who had been riding on the rear of the truck controlling the tiller.

Mr. Bullock got the woman out the window and sent her down the ladder with Mr. Logan, who was not wearing an air-pack and so was not allowed by Mr. Bullock to enter the smoke-filled apartment.

A few minutes later, he went next door and found the woman who was struggling to breathe. He picked her up and almost lost her when he tripped over a coffee table.

“That’s a common problem,” Mr. McIntyre said. “You might be able to walk through your apartment blindfolded, but we have no idea how the furniture is placed. And when there is no light, it is easy to run into chairs and tables you don’t know are there.”

Mr. Bullock said he was able to get to the door but said he felt disoriented when entering the hallway, unsure of where to go.

Then a Henrico County firefighter opened a stairway door. “I was alright then,” Mr. Bullock said.

He handed the woman off to the firefighter and then went back into the smoke to knock on each apartment door and get the residents out.

Mr. Bullock said his air-pack was almost out of oxygen, but he put the mask on each person who responded and led them to the stairway exit. He did not wear the mask himself, following a common practice of firefighters then to brave smoke without any protection.

Mr. Bullock and Mr. McIntyre recall officers who never wore a mask in working in a blazing, priding themselves on being “smoke -eaters.” Mr. McIntyre remembers getting hazed by older firefighters when he started masking up after joining the department in 1975.

In this case, Mr. Bullock said the “smoke was not that bad” so he kept going. In the end, he was able to find and escort everyone else in the apartments on the floor to safety, 11 in all, he recalled.

“I was young, and this is what we were trained to do,” he said, even if it went unrecognized.

Mr. Bullock is proud that a son, William B. Bullock, followed in his Richmond firefighter footsteps and was recently promoted to captain.

He said his son got his start participating as a teen in the Fire Department’s Fire Explorer program, which Mr. Bullock said is now defunct. He said restarting the program could be a great way to encourage young people to become firefighters and help end the numbers shortfall the department is experiencing.