Pro basketball is all in the family for many NBA draftees 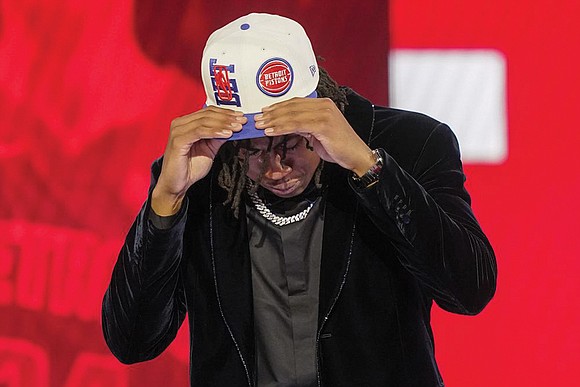 Jaden Ivey dons a Detroit Pistons cap after being selected fifth overall June 23 by the Pistons in the NBA basketball draft in New York. Photo by John Minchillo/AP Photo

After being selected with the fifth overall pick by the Detroit Pistons in the NBA draft June 23, Jaden Ivey celebrated with his family and quickly went to the stage to shake Commissioner Adam Silver’s hand. As he proceeded to walk off stage, he was overcome with emotion, and tears continued to stream down his face as he spoke with ESPN’s Monica McNutt. Ivey’s mother, Niele Ivey, was right by his side.

Having played in the WNBA for five seasons, Ivey instilled basketball in Jaden early on, growing his love for the game.

Seven picks after Smith Jr. was selected, Johnny Davis was taken 10th overall by the Washington Wizards. His father, Mark Davis, also briefly played in the NBA in the late 1980s.

The family affair did not only stop in the first 10 picks as former Duke Blue Devils Mark Williams and A.J Grif-fin were selected back-to-back with the 15th and 16th overall selections.

Griffin’s father, Adrian, a current assistant coach for the Portland Trailblazers, played in the NBA for nearly a decade while Williams’ older sister, Elizabeth, currently plays for the Washington Mystics in the WNBA.

In addition to those drafted, the Los Angeles Lakers signed free agent deals with the sons of two former NBA legends, Scottie Pippen and Shaquille O’Neal.

Scotty Pippen Jr. and Shareef O’Neal will both have the opportunity to compete for roster spots this summer.

Children following in the footsteps of their parents is nothing new in the NBA.

Still, it takes a lot for a professional athlete to succeed in a league that features under 400 total players.

To have a family member who has had professional experience can be crucial if not essential for a young NBA player’s success.

Al Horford and Grant Williams of the Boston Celtics both have family connections with the NBA.

Horford’s father, Tito, played in the league for the Milwaukee Bucks and the Washington Bullets. Williams’ cousins Salim and Damon Stoudamire, both played in the professional arena.

David Stoudamire helped coach Williams as an assistant for the Celtics this year.

It is no surprise many of the most accomplished players in the NBA have these family connections.

Seeing the work ethic, daily life, routine and sacrifices of family members front and center can be all it takes to give many young players an upper hand when it comes to achieving and sustaining success in the NBA.

The writer is a Richmond Free Press summer intern.