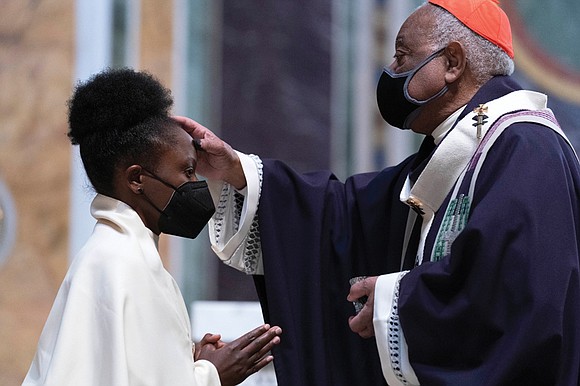 Cardinal Wilton Gregory, the archbishop of Washington, places ashes on the forehead of a parishioner during Ash Wednesday Mass last week at Saint Matthew the Apostle Cathedral in Washington. Ash Wednesday marks the beginning of Lent. Photo by Jose Luis Magana/Associated Press

VATICAN CITY - Pope Francis used Ash Wednesday to praise practical and spiritual efforts to promote peace, encouraging people to dedicate prayers and fasting to ending the conflict in Ukraine as the church season of Lent begins.

The pontiff also thanked countries that are welcoming migrants from the war-torn country. “Let’s keep the memory of this people in our hearts,” the pope said.

Ash Wednesday, the opening of Lent, was commemorated March 2 at the Vatican in a day of prayer and fasting for peace in Ukraine.

“For us Catholics, Ash Wednesday is already a day of prayer and fasting,” said Cardinal Kurt Koch, who heads the Pontifical Council for Promoting Christian Unity. Public prayer may also “appeal to the conscience of all those who have power over war and peace,” he added.

Addressing Polish Catholics during his general audience on Ash Wednesday, Pope Francis praised them for being the first “to support Ukraine, opening your borders and your hearts and the doors to your homes to Ukrainians fleeing war. You are generously offering them all that is necessary to live with dignity despite the dramatic moment.

“I am deeply grateful and bless you from the heart!” he added.

Pope Francis is deploying two of his most trusted Vatican officials, both cardinals, to go to Ukraine to seek an end to the conflict and to advocate for immigrants and refugees and foster relations with local churches.

In what the Vatican called “an extraordinary gesture,” Cardinal Konrad Krajewski and Cardinal Michael Czerny will go to the war zone. Cardinal Czerny is the ad interim prefect of the Vatican Department for Promoting Integral Human Development. Cardinal Krajewski holds the title of papal almoner, officially charged with performing acts of mercy on behalf of the pope.

“The Holy See has put itself at the service of achieving peace in Ukraine,” the Vatican said in a statement issued on Monday, adding that the two cardinals “are directed to Ukraine and depending on the situation they intend to reach the country in the coming days.”

Cardinal Czerny was scheduled go to Hungary on Tuesday to assist migrants entering the country from neighboring Ukraine, while Cardinal Krajewski will go to Poland, where he will focus on helping migrants and volunteers at the border until he can find safe passage into Ukraine itself.

According to the Vatican statement, Cardinal Czerny will “raise concern that African and Asian residents in Ukraine, also suffering fear and displacement, be allowed to seek refuge without discrimination.”

Recent media reports showed that some African and South Asian citizens seeking to flee Ukraine were met with hostility by Ukrainian officers at the border and were not allowed to board the trains, which gave priority to white refugees.

Pope Francis has advocated on behalf of immigrants and refugees since the beginning of his pontificate, which has seen millions seek shelter from strife in the Middle East. As 1.5 million people have fled the war in Ukraine, Europe faces a new migratory wave.

The pope’s message to Poland was read to the audience by a Ukrainian Franciscan friar whose family lives near Kyiv. “His parents are right now in underground bunkers to protect themselves from bombs,” the pope said, “and he’s here performing his duty with us.”

Pope Francis said that by accompanying the friar, “we accompany all the people suffering from the bombings” and show support for the many elderly people hidden in bunkers.

The conflict has complicated Pope Francis’ pursuit of ecumenical relations with the Eastern Orthodox Christian hierarchy after meeting with Patriarch Kirill of Moscow in Havana in 2016. The Vatican had hoped for a second encounter this spring, but the war has exacerbated the estrangement of the Moscow Orthodox Church and its satellite church in Ukraine from a newly recognized patriarchate based in Kyiv, Ukraine.

Catholics make up less than 10 percent of Ukrainian Christians, but the local church loyal to Rome has relentlessly pushed for dialogue, while also promising to stand up against the Russian aggressor. Archbishop Sviatoslav Shevchuk, who heads the Greek Catholic Church in Ukraine, urged believers last week to join Pope Francis in prayer and fasting on the seventh day of war.

“These past few days we said that only when we will be united, cohesive, we will become strong and we will be able to resist this war,” the archbishop said. “The power of a people is in unity.

“Joining in prayer means transmitting life to one another. It means sharing one’s own vital force with our neighbor, and thus become stronger with that vital force that we receive from those with whom we join in prayer,” Archbishop Shevchuk said in his daily message from Kyiv.

Fasting also takes on a unifying dimension, the archbishop said. “Today’s fasting is so important to cast away that which divides us—the devil, the spirit of war and the spirit of death,” he said.