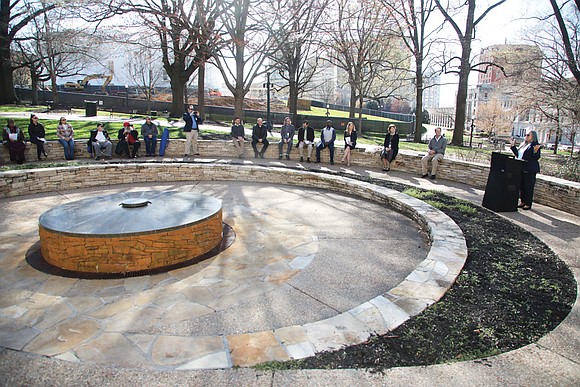 Chief Anne Richardson, leader of the Rappahannock Indian Tribe, speaks during a ceremony Monday honoring Pocahontas, or Matoaka, the young Native American woman whose influence aided the survival of the English settlers at Jamestown in the early 1600s and bolstered relations with the English when she traveled to England later with her white husband, John Rolfe, and son, Thomas. The ceremony in Capitol Square at “Mantle,” the monument recognizing Virginia Indians, was held on the day marking her funeral and burial in 1617 in St. George’s Church in Gravesend, England. Jenna Moon, deputy state secretary of the commonwealth, read a proclamation by Gov. Glenn A. Youngkin recognizing March 21, 2022, as a “Day of Honor for Pocahontas,” and calling on Virginians to “celebrate her example as a patron of peace and cross-cultural understanding.” Rick Tatnall, executive director of The Pocahontas Project, hopes March 21 will be an annual observance. With Chief Richardson, right, is Chief Lynette Alston, head of the Nottoway Tribe. 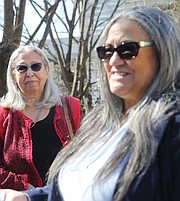