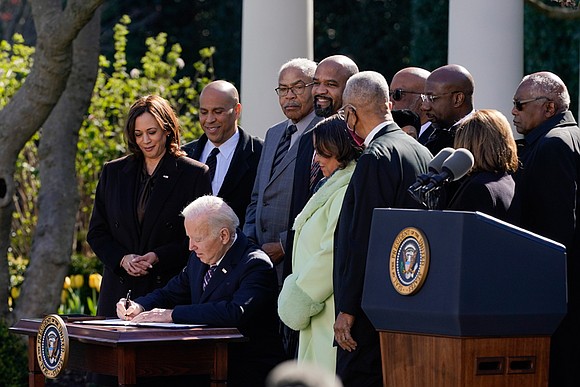 It was more than 120 years in the making, but President Biden on Tuesday signed into law the first federal legislation to make lynching a hate crime, addressing a history of racist killings in the United States. Photo from Associated Press

In a ceremony in the White House Rose Garden, President Biden sat at a small desk and put his signature on the Emmett Till Anti-Lynching Act that now makes lynching punishable by up to 30 years in prison.

“Lynching was pure terror to enforce the lie that not everyone belongs in America, not everyone is created equal. Terror to systemically undermine hard-fought civil rights,” President Biden said to the audience of civil rights leaders, Congressional Black Caucus members and other elected officials and guests.

The new law is named for Emmett Till, the Black 14-year-old from Chicago who in 1955 was visiting relatives in Money, Miss., when he was accused of whistling at a white woman. He was kidnapped, beaten and shot in the head. A large metal fan was tied to his neck with barbed wire and his body was thrown into the Tallahatchie River. His mother, Mamie Till, insisted on an open casket at his funeral to show the brutality he suffered.

Photos published in JET magazine at the time propelled the story about the teen’s death to national attention, galvanizing public outcry that helped spark the Civil Rights Movement.

Two white men, Roy Bryant and his half-brother J.W. Milam, were charged with the teen’s murder, but were acquitted by an all-white male jury. The two later told a reporter that they kidnapped and killed the teen.

At Tuesday’s ceremony, President Biden was joined by the Rev. Wheeler Parker Jr. of Chicago, a cousin of Emmett Till who was with him in the grocery store when Emmett allegedly whistled at Carolyn Bryant. Rev. Parker also is the last living witness to Emmett’s abduction at gunpoint from his great-uncle’s home four days later.

Also at the ceremony for the signing was Michelle Duster, great-granddaughter of newspaper editor and anti-lynching crusader Ida B. Wells, along with Vice President Kamala Harris and Richmond Mayor Levar M. Stoney.

“I was overwhelmed with emotion witnessing this historic milestone as President Biden made lynching a federal hate crime,” Mayor Stoney wrote afterward on Instagram. “What happened to Emmett Till and the over 6,500 murdered Black Americans should never happen again. Today after over 200 attempts, America stepped up. Thank you, @POTUS.”

Congress first considered anti-lynching legislation more than 120 years ago. But until March of this year, it had failed to pass such legislation nearly 200 times, beginning with a bill introduced in 1900 by Rep. George Henry White of North Carolina, the only Black member of Congress at the time.

Vice President Harris was a prime sponsor of the bill when she was in the U.S. Senate.

President Biden in his remarks thanked the civil rights leaders, Congressional Black Caucus members and others who kept pushing for the law for “never giving up, never ever giving up.”

He stressed that forms of racial terror continue in the United States, demonstrating the need for an anti-lynching statute.

More than 4,400 Blacks died by lynch- ing between 1877 and 1950, mostly in the South, he said, noting that the law is not just about addressing history.

“It’s about the present and our future as well,” he said, mentioning the racially motivated shotgun death of 25-year-old Black jogger Ahmaud Arbery by a white father and son in February 2020 in Georgia, and the rally of white nationalists in Charlottesville in 2017.

The new law makes it possible to prosecute a crime as a lynching when a conspiracy to commit a hate crime leads to death or serious bodily injury, according to the bill’s champion, Democratic Congressman Bobby Rush of Illinois. The law lays out a maximum sentence of 30 years in prison and fines.

The U.S. House of Representatives approved the bill 422-3 on March 7, with eight members not voting, after it cleared the U.S. Senate by unanimous consent. Rep. Rush had introduced a bill in January 2019, but it stalled in the Senate after the House passed by a vote of 410-4.

The NAACP began lobbying for anti-lynching legislation in the 1920s. A federal hate crime law was passed and signed into law in the 1990s, decades after the Civil Rights Movement.

“Today we are gathered to do unfinished business,” Vice President Harris said, “to acknowledge the horror and this part of our history, to state unequivocally that lynching is and has always been a hate crime and to make clear that the federal government may now prosecute these crimes as such.”

“Lynching is not a relic of the past,” she added. “Racial acts of terror still occur in our nation, and when they do, we must all have the courage to name them and hold the perpetrators to account.”