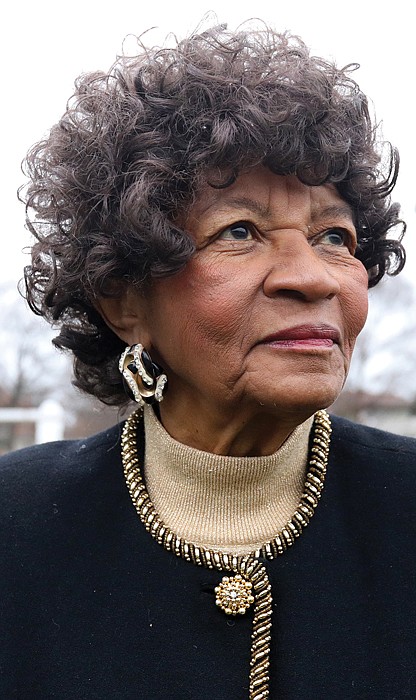 Growing up poor in Clarksville, Dr. Regenia A. Perry was regarded as a lost cause by some teachers in the community, unlikely to amount to much because of her outspoken and inquisitive nature.

But Dr. Perry, who at age 24 became the first African-American woman to earn a Ph.D. in art history, became a trailblazer in the art world, finding and documenting the work of African-American folk artists whose work was unmatched and overlooked.

“With the passing (in 2020 of artist, curator and scholar) David Driskell, I am the senior surviving art historian who knew all of the Old Masters,” Dr. Perry says.

In tribute to Dr. Perry, the Virginia Museum of Fine Arts has established a curatorial position named for Dr. Perry and endowed by the Jessie Ball duPont Fund. The position, the Regenia A. Perry Assistant Curator of Global Contemporary Art, is now held by Alexis Assam, who will help build the museum’s collections and develop exhibitions for the museum’s diverse audiences.

In its strategic plan, VMFA is committed to dedicating a third of its acquisition funds to African and African-American art. Dr. Perry was shocked and thrilled to learn of the tribute by the VMFA, which provided her with a fellowship in 1961 that enabled her to attend what is now Case Western Reserve University and earn a master’s in art history when she was 21.

“This is an honor that is generally bestowed upon someone after their death,” Dr. Perry says.

Because of her scholarship, she has taught at several colleges and universities, including Howard University. But the majority of her professional career was spent at Virginia Commonwealth University, where she taught art history for 25 years.

Preserving and exhibiting the work of African-American artists is something she views as deeply important for the community it reflects.

“History is so important for current and future generations,” Dr. Perry says, “especially for African-Americans because so much of our history has been lost.”

For those entering into the profession, she offers advice based on the lessons she has learned in a storied career: “Work hard and strive to be the best,” Dr. Perry says. “Never worry about public opinion of yourself if you are confident about what you are doing.”

Meet a trailblazer in the art world who both documented and made history, Dr. Regenia A. Perry:

Latest honor: Creation of the Regenia A. Perry Assistant Curator of Global Contemporary Art, an endowed position at the Virginia Museum of Fine Arts.

Where I live now: Richmond and New Orleans.

The Regenia A. Perry Assistant Curator of Global Contemporary Art is: A position to collect and document contemporary art worldwide.

How I received initial news of this endowed position: I was googling my name on the internet.

My reaction: Complete surprise — shock. I am eternally indebted to the Virginia Museum of Fine Arts for providing the fellowship that enabled me to receive my master’s degree at age 21.

First person to fill this position: Alexis Assam, who previously worked as the Constance E. Clayton Curatorial Fellow in the Contemporary Art department at the Philadelphia Museum of Art.

Advice I give this first person honoring my name: Always strive to be the best that you can be and realize that you have to strive “extra hard” as a minority. At VCU, where I taught for 25 years and was one of the first three full-time African-American professors, I had to nominate myself for promotion to full professor.

Why I think the VMFA decided to honor me: My groundbreaking work in the field of African-American folk art and my groundbreaking exhibition at the Metropolitan Museum of Art in New York in 1976.

What I am most known for in the art world: I am the foremost authority in African- American folk art. In order to understand it, you must live among the artists. I began collecting during the 1980s when many of my peers thought that I was crazy.

Significance to me of this honor: It is indescribable! I am not sure that I deserve it! This is an honor that is generally bestowed upon someone after their death. I am so thankful that I had the foresight to document African-American folk art during the heyday of the1980s and 1990s. Sadly, all of the Old Masters are dead.

What would my hometown say? My hometown of Clarksville, Va., population 1,200 today, has few people who would still remember me as I was 16 when I left to attend Virginia State University in Petersburg. Growing

up in abject poverty, many of my teachers predicted that I “would not amount to anything” because I was too outspoken and inquisitive.

Collecting and learning about artists and their art is important because: History is so important for current and future generations, especially for African-Americans because so much of our history has been lost.

My art collection during its peak included: More than 3,000 African-American folk artifacts previously unknown to the general public.

Advice to students interested in entering the art curatorial and history profession today: Work hard and strive to be the best. Be willing to travel abroad to see world-famous monuments. Never worry about public opinion of yourself if you are confident about what you are doing. So many of my colleagues called me “crazy” because of my early interest in African-American folk art.

A perfect day for me: Browsing thrift shops and working on my papers to send to Emory University.

What I am learning about myself during the pandemic: I can complete many overdue projects as I self-isolate.

Something I love to do that most people would never imagine: Browse flea markets and antique shops to discover new artifacts. My endless cu- riosity makes me stop.

Quote that inspires me: Be the very best that you can be.

Friends describe me as: Outspoken and loyal, basically a “loner.” I enjoy my solitude.

At the top of my “to-do” list: Place the remainder of my artifacts in museum collections.

Best thing my parents ever taught me: To respect my elders.

Person who influenced me the most: Mrs. Lola H. Solice, superintendent of Granville County, N.C., Negro Schools in the 1950s.

Book that influenced me the most: “Roots: The Saga of an American Family” by Alex Haley.

Next goal: About 10 years ago, the Coca-Cola Co. in Atlanta gave the Woodruff/Rose Library at Emory University $10 million to establish an African-American archival library. The Woodruff Library has agreed to purchase “all” of my paper works and many artifacts from my collection. My files are vast. I have been providing information for several years and have mailed 40 boxes of materials and have more to send — both fine and folk art. I have been a pack rat of information on fine and folk African-American art. With the passing of David Driskell, I am the senior surviving art historian who knew all of the Old Masters.