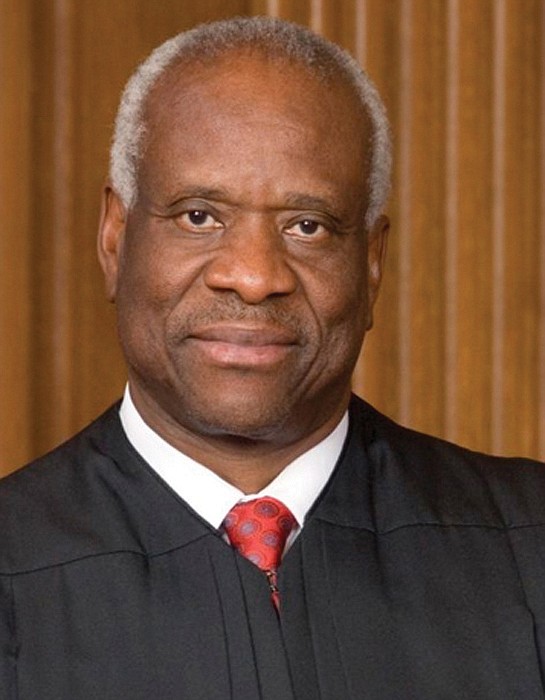 WASHINGTON - Suspicions are growing that the lone Black justice on the U.S. Supreme Court used his court position to try to protect his wife from being exposed as a champion of Donald Trump’s bogus claim that he beat Joe Biden in the 2020 presidential election and should still be president.

Such suspicions are fueling calls from Democrats in Congress for Justice Clarence Thomas to step aside from hearing any cases involving the Jan. 6 attack on the U.S. Capitol, which sought to halt the certification of President Biden’s victory.

Justice Thomas, 73, has a lifetime appointment. Like other justices, he is not subject to the judicial canons and ethics rules that bar lower court federal judges from participating in cases in which they have a personal interest or could appear to have a conflict of interest.

The conservative justice has not responded and could not be stopped from participating in such cases unless he was removed from office through impeachment in the U.S. House of Representatives and conviction in the U.S. Senate, an unlikely prospect given the narrow division in the House and Senate between Republicans and Democrats.

Still, the calls reached a crescendo this week after published and broadcast reports on March 28 revealed that Justice Thomas’ wife, Virginia “Ginni” Thomas, had repeatedly texted former President Trump’s chief of staff Mark Meadows to urge him to challenge his boss’ loss in the election.

Those texts appeared to some to explain why Justice Thomas was the lone dissenter when the court, in an 8-1 decision, refused to block the Jan. 6 committee from obtaining Trump White House records from the National Archives and Records Administration earlier this year.

Among those voicing suspicions of Justice Thomas’ conduct is Democratic Sen. Tim Kaine of Virginia.

“Justice Thomas was the sole member of the Supreme Court who would have allowed records from Trump, Meadows, et al to be withheld from House Jan. 6 Committee. He did not explain his reasoning. We need answers,” Sen. Kaine stated in a tweet.

Mr. Meadows already had turned over some records to the committee, but had urged the high court to block the committee from getting those held by the archive, despite acknowledging that the archive likely had relevant items that had not been disclosed.

Sen. Ron Wyden, a Democrat from Oregon, is among those urging Justice Thomas to avoid participating in any more ap- peals of Jan. 6 cases in light the text messages traded between Mrs. Thomas and Mr. Meadows after the 2020 election.

“Justice Thomas’ conduct on the Supreme Court looks increasingly corrupt,” the senator stated. “Justice Thomas participated in cases related to Donald Trump’s efforts to rig and then overturn the 2020 election, while his wife was pushing to do the same,” Sen. Wyden said.

The text messages that were disclosed were shocking to Sen. Wyden and other Democrats, though Republican lawmakers, who have mostly backed Mr. Trump’s claims, saw little cause for alarm.

In some of the text messages — copies of which were obtained by The Washington Post and CBS News — Mrs. Thomas urged Mr. Meadows and Mr. Trump to follow the lead of lawyer Sidney Powell, who made wild claims of voter fraud that she never backed up with any evidence.

In one such text message, Mrs. Thomas urged Mr. Meadows to “release the Kraken and save us from the left taking America down,” the Post reported.

U.S. Rep. Ted Lieu, a California Democrat, also was vocal about the need for Justice Thomas to step aside from cases related to the insurrection.

“Ginni Thomas can do whatever crazy things she wants,” he stated. “But Supreme Court Justice Clarence Thomas cannot rule on a case that would disclose the crazy things Ginni Thomas was doing. That is a clear conflict of interest.”

While some justices are scrupulous about recusals, Justice Thomas has long been listed among the justices who are not.

Republican leaders did not express any such concerns. Asked if Justice Thomas should recuse himself from Jan. 6 cases, House Minority Leader Kevin McCarthy, a California Republican, told reporters, “No, I think Justice Thomas could make his decisions like he’s made every other time. It’s his decision based upon law,” continued Rep. McCarthy, who panicked during the insurrection but allowed members of his party to continue to attack the legitimacy of Mr. Biden’s election.

“If you spent any time studying the Supreme Court justice, he’s one who studies correctly and I mean, from all the way through. If he sees it’s not upholding the Constitution, he’ll rule against it,” Rep. McCarthy said.

“Justice Thomas is a great American and an outstanding Justice. I have total confidence in his brilliance and impartiality in every aspect of the work of the Court,” Sen. McConnell stated in a release.

In contrast, Sen. Mazie Hirono, a Democrat from Hawaii, said Justice Thomas’ decision on the White House records shows that it is time for Congress to close the loophole that allows members of the Supreme Court to avoid being subjected to the federal code of judicial conduct.

“This is an example,” she said, “of why a clear code of conduct is necessary for every member of the judiciary, including the Supreme Court.”