Former city worker and union advocate: ‘I had no one to go to bat for me’ 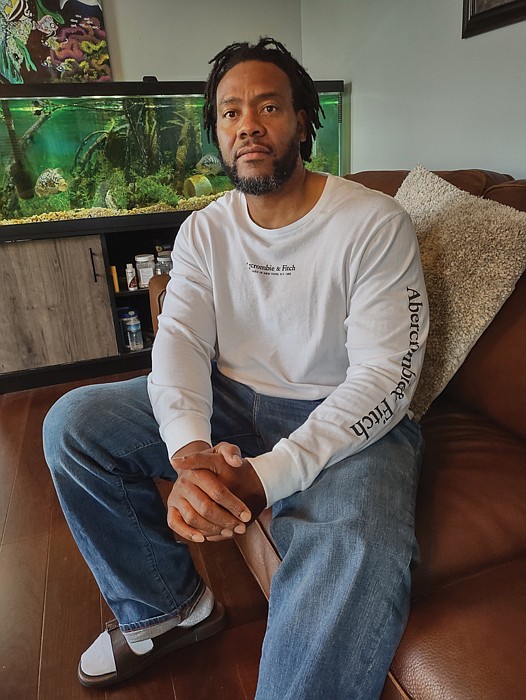 Andrew Thomas, 49, quit his job with the City of Richmond after he says little to no accommodation was made after he was diagnosed with cancer or to help him receive disability. Photo by Jeremy M. Lazarus

Andrew Thomas hoped to build a career in the Richmond Department of Public Utilities.

Instead, the 49-year-old Jamaica native has quit the department after seven years.

He said he was tired of the verbal abuse that he said supervisors meted out almost daily and that no one in authority would stop.

He was aggravated that, after he was diagnosed with cancer, the city never assisted him to get disability payments that he had paid for through his paycheck.

And he is upset that the city never provided any accommodation, such as allowing him to drive a truck, after his physician authorized him to do “light duty” work.

“I had no one to go to bat for me,” said Mr. Thomas, who said he would only consider returning if there were a union in place to represent him.

The city does not comment on personnel matters, making it nearly impossible to get their side.

Mr. Thomas’ view of the abuse he faced, documented in an internal investigation by the city Department of Human Resources and obtained by the Free Press, is shared by others on the city payroll — fueling the movement for an employee union that could fight for improved working conditions and compensation.

At a City Council committee meeting this week, members of the governing body heard from social workers advocating for a union who said they are berated for not meeting reporting deadlines despite being swamped with cases. One social worker reported having 2,000 cases.

“There is no way to meet deadlines,” she said. “Everyone knows that,” she said, but the stress from managers continues.

City of Richmond employees could soon have the opportunity to organize and bargain on wages, benefits and working conditions.

City Council appears close to advancing a plan allowing all local government workers to unionize, spurning Mayor Levar M. Stoney’s proposal that would allow only labor and trade employees to do so.

Under the proposal, the council would have the final say on approving expenditures required to cover the cost of wages and benefits and other items agreed to between the city administration and bargaining units. Strikes also would be banned.

In preparation, the council included $330,000 in its 2022-23 spending plan to cover initial administrative expenses after July 1, an amount recommended by the Stoney administration.

The modified plan Ms. Nye and Ms. Trammell are advancing would authorize three bargaining units, one for police officers, one for firefighters and one for general employees, if employees vote to create them.

The amended plan also would protect workers from discipline for receiving or sending communications on union matters during the workday, Ms. Nye said.

The amended plan also would allow employee unions to bargain on virtually all issues, except for matters of police misconduct that could be taken up by a proposed civilian review board, she said.

All nine members of City Council appear supportive of the concept, and expectations are that five or more members will embrace the amended plan. The approval vote could take place by the end of May.

If the plan is approved, Richmond would join Arlington County and Alexandria in embracing the authority the General Assembly provided last year to allow public service unions in local government entities. Richmond Public Schools earlier this year became the first school district in the state to allow teachers and staff to unionize. — JEREMY M. LAZARUS

The concerns employees voice over unfair treatment stretch from the city Department of Finance to the Department of Public Works. Currently, city employees do not have contracts, and employees have been forced to sue the city to gain overtime pay.

He joined the city in 2014 and worked in the warehouse. His problems began after he was assigned to work with on corrosion issues with a supervisor, according to statements Mr. Thomas provided to investigators from the Human Resources department.

Mr. Thomas said he felt compelled to seek a reassignment after discovering that the supervisor, identified in the report as Alonzo White, allegedly was operating a side business during the workday. He brought the situation to supervisors, and two months later was reassigned to work on the pipefitting team under a different supervisor in February 2020.

He recounted one incident in which a pipefitting supervisor, Valonta Thompson, cursed and abused him when he showed up for an assignment.

“It was ongoing every day,” Mr. Thomas stated in the report. “Mr. Thompson did this in front of ... other co-workers.”

According to Mr. Thomas, another supervisor he was later assigned to, Sebastian A. Pryor, often berated him and “timed his lunch breaks.” According to the report, Mr. Pryor also required Mr. Thomas to carry all the equipment.

Mr. White did not respond to Free Press request for comment, and Mr. Thompson and Mr. Pryor could not be reached for comment.

Mr. Thomas also stated that after starting cancer treatment, he kept getting harassing phone calls and emails from the city demanding to know why he was not coming to work and threatening to fire him. He said the harassment continued even though he and his doctor sent notices to appropriate officials informing that the treatment he was undergoing would not allow him to return to work.

“It was so frustrating,” Mr. Thomas said. “I would send them the information, and they would keep calling,” he said, noting

it took repeated effort to get the calls and emails to stop.

He said he had paid for an Aflac disability policy through payroll deduction, and it was supposed to go into force after he used up his city sick leave. But it never happened, he said, and he said the city’s HR staff did not intervene to ensure he was paid under the policy.

Mr. Thomas, who has a commercial driver’s license, said he finally quit his job when Human Resources refused to consider his application for a truck driver and, instead, told him to return to his pipefitting post, which requires the kind of heavy lifting his doctor had barred him from doing.

“It has all been very stressful,” Mr. Thomas said. “I had hoped to stay with the city, but it has turned out to be a bad place for me. All I wanted was to do my job. Instead, I was treated miserably. And no one seemed to care.”