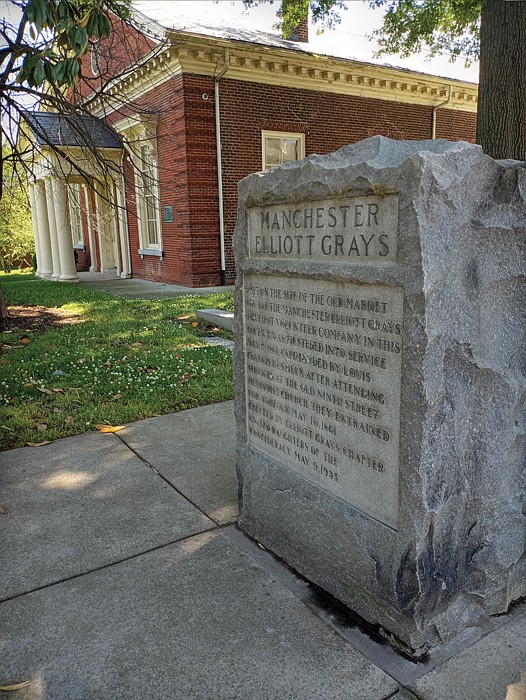 Confederate marker on the lawn of the Marsh Courthouse in Manchester.

A new state history marker to a long forgotten Black cemetery in Richmond is on the way, while two highway markers to the city’s Confederate past have been removed.

It has taken a year, but the marker for the Shockoe Hill African Burying Ground where 22,000 people were interred in North Side will soon go up.

A dedication ceremony is scheduled for 2:30 p.m. Sunday, June 12, at 5th and Hospital streets, the site of the segregated cemetery that the City of Richmond operated for enslaved and free Black people between 1816 and 1879 and then promptly forgot.

Although ranked as the largest public burial ground for Black people in the country, City Hall sold the 30-acre site and allowed private businesses to pave over and build a store on it. Railroad tracks and a portion of Interstate 95/64 were permitted to run through it.

No one paid attention until a Texas teacher, Lenora C. McQueen, began an unrelenting lobbying campaign four years ago to protect the burial ground where some of her ancestors are buried.

As the result of her efforts, the city has repurchased a 1.5-acre portion of the cemetery’s grounds, although it has yet to remove a former service station and parking area, and the burial ground has gained listing on the Virginia and national registers of historic places.

Ms. McQueen, who also won support from the state Department of Historic Resources to fund and place the marker on the site in June 2021, teamed with Richmond cemetery expert Dr. Ryan K. Smith to write the text.

“This sign will call attention to what should be a sacred site and hopefully create more respect and better treatment for the last resting place of so many,” Ms. McQueen said.

Meanwhile, City Hall quietly has removed two stone markers from city property at Maury Street and Harwood avenues that officially designated a portion of U.S. 1 in South Side as Jefferson Davis Highway, which has been renamed Richmond Highway.

The city Department of Public Works undertook the removal without the kind of fanfare that was involved with the removal of Confederate statues. It was noticed by community activist Michael Sarahan, who had been lobbying for the work to be done.

Mr. Sarahan also has been urging the city to remove a huge stone marker to Richmond Confederate units that still sits on the lawn of the Henry L. Marsh III and Harold M. Marsh Sr. Manchester Courthouse at 9th and Hull streets.

However, the city has not taken any action, even though judges at the building named for the two prominent Black lawyers are supportive.

According to Robert Steidel, the city’s deputy chief administrative officer, the delay in removal of that marker is due to city staff being preoccupied by the statue of Confederate Gen. A.P. Hill in North Side. He also stated that the city also would need to follow the process required to remove a marker that is a registered historic landmark with the state and federal governments. He added that the removal would be undertaken when resources are available.

Mr. Sarahan noted that the city had no problem removing the Jefferson Davis Highway markers from city property, even though, they, too, were registered landmarks.

Separately, City Council has not acted to remove all Confederate symbolism. The council appears to have dropped the idea of renaming the Robert E. Lee Bridge or changing any of the Confederate street names that are still commonplace. There is no mention of any plans for such action on the agenda of the governing body or of any of the council committees.