Perseverance and legacy were themes of VUU’s commencement 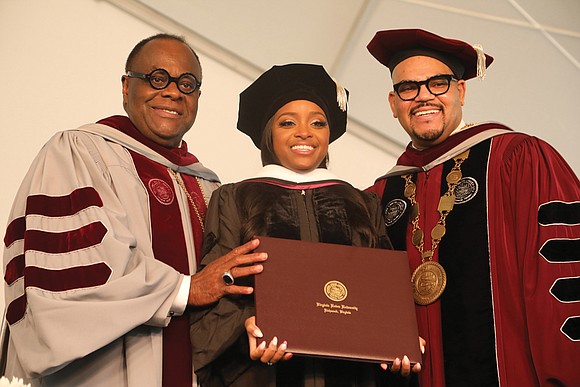 Social activist Tamika D. Mallory, who delivered the commencement address, smiles after receiving an honorary degree. She is flanked by Dr. W. Franklyn Richardson, left, chairman of the VUU Board of Trustees, and VUU President Hakim J. Lucas. Photo by Regina H. Boone

Six different classes of Virginia Union University graduates, some stretching as far back as five decades, were recognized for their academic accomplishment last Saturday during the first in-person commencement ceremony in two years.

Hundreds gathered at Hovey Stadium on Willie Lanier Field, which was covered by tents to keep out the rain during the celebration. Graduates from the Class of 2022, and 2020 and 2021 also were recognized for their hard work and educational achievement during the COVID-19 pandemic.

“We cannot know what others may have done during the global pandemic. We do not know what others do when troubles come. But for those who we celebrate today, no matter what comes their way, they finished what they started,” said Dr. Hakim J. Lucas, VUU’s president and chief executive officer.

The classes of 1970, 1971 and 1972, called “Golden Classes” because they were celebrating their 50th reunions, also were celebrated during the ceremony.

Dr. Lucille M. Brown, an Armstrong High School graduate, 1950 graduate of VUU, member of the VUU Board of Trustees and former superintendent of Richmond Public Schools, is give a motorized escort by campus police to the commencement exercises at Hovey Stadium.

The keynote speaker was Tamika D. Mallory, a social justice activist who was co-chair of the 2017 Women’s March in Washington that drew more than 500,000 people to protest the inauguration of former President Trump and to advocate for women’s rights, racial justice, health care and immigration reform.

Ms. Mallory, who also is a co-founder of the social justice organization Until Freedom, extolled the power and resilience of African-American people.

Reminding the audience of the debts still owed to the Black community and the challenges the Black people currently face, she urged graduates to enjoy the fruits of their academic labor, but to not lose sight of the work to be done in the world and their ability to build a better one.

“We cannot let them take our joy, but we also cannot lose the fight and live in a naive state of believing that we don’t see what we see in front of us,” Ms. Mallory said. “We must claim our collective power at the ballot box, in the streets and everywhere decisions are made. You make sure that you are in the room.”

Ms. Mallory was one of four people awarded honorary degrees during the ceremony. Other honorees were 4th District Congressman A. Donald McEachin of Richmond, a graduate school alumnus of VUU’s Samuel DeWitt Proctor School of Theology; the Rev. Gina Marcia Stewart, pastor of Christ Missionary Baptist Church in Memphis and the first woman president of the Lott Carey Foreign Mission Convention; and Pulitzer Prize-winning columnist Michael Paul Williams of the Richmond Times-Dispatch.

Rev. Stewart is a visiting professor of practical theology at the School of Theology, and Mr. Williams is an alumnus of VUU.

Among the 2022 graduates was valedictorian Brielle Le’Shay Samuels, a social work major from Trenton, N.J., who entered VUU as a Presidential Scholar and earned grades that landed her on the Dean’s List. She plans to pursue a master’s in social work at Howard University.

Anthony Samuels of Trenton, N.J., gets close to the podium to photograph his daughter, VUU valedictorian Brielle Le’Shay Samuels, as she spoke during the ceremony. Tears of pride and joy streamed down his cheeks as he captured the moment.

Hayden Garcia, a native of Cape Town, South Africa, and VUU biology major who also played on the Golf Team, was named class salutatorian, earning a 4.01 GPA. He plans to enroll at VUU as a graduate student while completing his final year with the golf team. His goal is to become a professional golfer.

Mr. Garcia and Ms. Samuels were among several VUU graduates recognized as part of the school’s Presidential Top 13, who each received a $13,000 cash award for their academic excellence.

According to Dr. Lucas, the Class of 2022 represented the largest number of VUU graduates with a 4.0 GPA or higher in the school’s history. Fifty percent of the graduates in the Class of 2022 plan to attend graduate school at VUU, while 25 percent already are employed.

“Today we launch the latest edition of Virginia Union Knights,” Dr. W. Franklyn Richardson, chairman of VUU’s board, told the audience. “We send them out to the world prepared to represent the great legacy of this university. We send them out and we say to the world, here are all the leaders of tomorrow. Here are those who will help shape the activities of the global village.

“We have existed through all of the challenges that Black people have had in this country, and this school is our testament that the grace of God has never left us, and today, we are stronger than we’ve ever been.”

Members of the graduating class march into the stadium at the start of last Saturday’s 123rd Commencement exercises. It was the first in-person commencement at VUU since 2019, and graduates of the classes of 2020 and 2021 also marched.