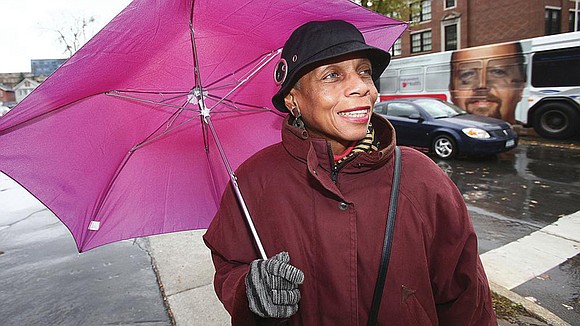 This photo dated Oct. 24, 2011, shows Katherine Massey walking near the corner of Elmwood and Tupper in Buffalo, N.Y. Ms. Massey was one of the victims killed in the grocery store shooting in Buffalo on May 14. Robert Kirkham/The Buffalo News via Associated Press

BUFFALO, N.Y. - In the late 1980s, Katherine “Kat” Massey was tired of the perpetually overgrown lot on state property on her street, so she sent a letter on “Cherry Street Block Club” letterhead to the governor, which led to it being cleaned up.

Ms. Massey was the only one who knew that the letterhead — and the block club — were her own creations and that she was the only “club” member.

It was the kind of stop-at-nothing advocacy Ms. Massey, 72, was always known for, those who knew her said at her funeral Monday as mourning continued for victims of the racist attack on a Buffalo supermarket.

“She was the mayor in every neighborhood that she lived in,” said U.S. Rep. Brian Higgins, one of several elected officials who joined family, friends and former co-workers inside Pilgrim Missionary Baptist Church for a celebration of her life.

Ms. Massey was among the 10 Black people killed May 14 when a white gunman in body armor targeted shoppers and workers at a Tops Friendly Market in a predominantly Black neighborhood of Buffalo. Three others were injured in the attack, which federal authorities are investigating as a hate crime.

The alleged gunman, 18-year-old Payton Gendron, of Conklin, has been charged with murder and is being held without bail.

Just before the start of a funeral service filled with laughter and tears, family members approached Ms. Massey’s open casket, pulling their facemasks aside and bending down to kiss her goodbye.

In reflections published in the funeral program, Ms. Massey wrote she considered herself “a single parent with 35,000 adopted children attending Buffalo’s public schools” and recounted renting a broccoli costume, which she accessorized with leopard gloves and sunglasses, to perform a rap song she wrote at one school’s health assembly.

Ms. Massey worked for 40 years at the health insurance company Blue Cross Blue Shield, retiring in 2011. She wrote to her family in January 2020 that she felt like her death was near. Two people had told her she looked like her mother, she said, just as her sister Patti and brother Robert Jr. had before they died.

“I take that as a sign my time here is ending,” she wrote.

“I told Patti don’t let me be a wimp when it’s my time and I believe she will do so,” she wrote. “And don’t none of you be wimps either!!”

Last May, Ms. Massey, who wrote for the Buffalo Challenger and Buffalo Criterion newspapers, wrote a letter to The Buffalo News, addressing “escalating gun violence in Buffalo and many major U.S. cities” and calling for “extensive” federal action and legislation.