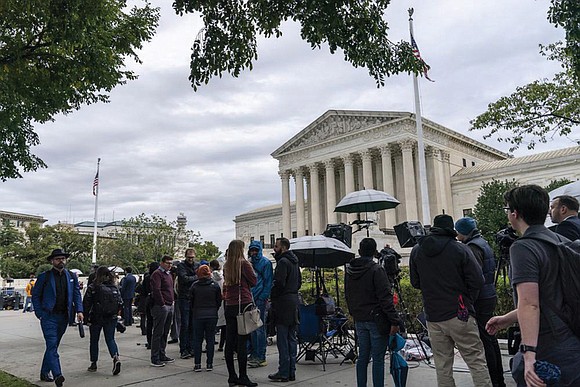 People gather as the Supreme Court begins its new term and to hear the first arguments Monday on Capitol Hill in Washington, . This session also was the first time that Justice Ketanji Brown Jackson participated as the court’s first Black woman justice. And it was the first time the public was able to attend since the court closed in March 2020 because of the coronavirus pandemic. Phot by J. Scott Applewhite/The Associated Press

WASHINGTON The Supreme Court on Tuesday took up an Alabama redistricting case that could have far-reaching effects on minority voting power across the United States and seemed likely to divide the court along ideological lines.

The justices heard two hours of arguments in the latest showdown over the federal Voting Rights Act, with lawsuits seeking to force Alabama to create a second Black majority congressional district. About 27 percent of Alabamians are Black, but they form a majority in just one of the state’s seven congressional districts.

Conservative high court majorities have made it harder for racial minorities to use the Voting Rights Act in ideologically divided rulings in 2013 and 2021. A ruling for Alabama in the new case could weaken a powerful tool that civil rights groups and minority voters have used to challenge racial discrimination in redistricting.

Justice Elena Kagan referred to the Voting Rights Act as not only “an important statute” but “one of the great achievements of American democracy” while acknowledging that recent Supreme Court cases have cut back on the law. “Now, in recent years, the statute has fared not well in this court,” she said.

Justice Kagan told Alabama’s lawyer, Edmund LaCour Jr.: “You’re asking us essentially to cut back substantially on our 40 years of precedent and to make this, too, extremely difficult to prevail on, so what’s left?”

Justice Sonia Sotomayor, the court’s first Hispanic justice, and Justice Ketanji Brown Jackson, the court’s first Black female justice who was hearing her second day of arguments, were similarly unsympathetic to Alabama’s arguments. Justice Jackson said “what we all want” is for people to “spread out and live among one another and vote based on their own ... views as opposed to along racial lines” but that is not what is happening in Alabama.

Justice Alito suggested that polarized voting has more to do with ideology and is “not based on race.”

Partisan politics underlies the case. Republicans who dominate elective office in Alabama have been resistant to creating a second district with a Democratic-leaning Black majority that could send another Democrat to Congress.

Two appointees of President Donald Trump were on the three-judge panel that unanimously held that Alabama likely violated the landmark 1965 law by diluting Black voting strength.

The judges found that Alabama has concentrated Black voters in one district, while spreading them out among the others to make it impossible for them to elect a candidate of their choice.

Alabama argues that the lower court ruling would force it to sort voters by race and the state insists it is taking a “race neutral” approach to redistricting.

That argument could resonate with conservative justices, including Chief Justice John Roberts. He has opposed most consideration of race in voting both as a justice and in his time as a lawyer in Republican presidential administrations.

Justice Roberts said little Tuesday to telegraph his vote. Justices Clarence Thomas and Neil Gorsuch also had little or nothing to say in court, but Justice Thomas in particular has voted consistently to limit the reach of anti-discrimination laws.

The outcome appears to rest with Justices Amy Coney Barrett and Brett Kavanaugh. Their questions suggested they may be open to a more narrow win for Alabama than the broadest outcome the state is asking for, which might even allow states to dismantle existing districts where racial minorities make up more than half the voters.