How will race impact pardons for marijuana possession? 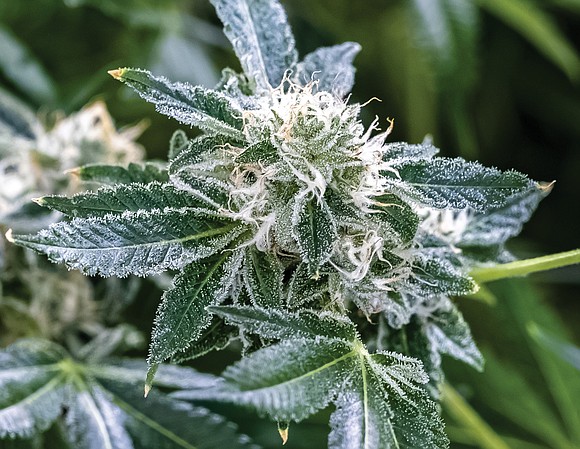 A marijuana plant being grown at the Green Leaf Medical facility in South Side has reached the flowering stage, producing tiny crystals called tricomes that are harvested for medicinal oils THC and CBD. The facility was the second medical marijuana dispensary to open in the state. Photo by Sandra Sellars

President Biden has signed an executive order pardoning thousands of Americans who have been federally convicted for a “simple” marijuana possession charge prior to Oct. 6.

But does this mean the smoke of disproportionate arrests and unreasonable and sometimes “mandatory minimum” sentencing is beginning to clear for Black inmates who remain behind bars under additional and state-level charges?

“As I’ve said before, no one should be in jail just for using or possessing marijuana,” President Biden tweeted soon after his executive order. “Today, I’m taking steps to end our failed approach.”

Marijuana is a psychotropic drug that temporarily changes the natural state of the mind. It consists of two main chemical elements, tetrahydrocannabinol (THC), the mind-altering component, and cannabidiol (CBD), the “sedative” component that contains medical benefits for health issues such as anxiety, insomnia, chronic pain and even addiction, according to Harvard Health.

The Controlled Substance Act of 1970 categorized a plethora of drugs into five differ- ent “schedules” based on its “medical use, potential for abuse, and safety or dependence liability.” The statute then further regulated the manufacturing, possession and distribution of those drugs under federal law.

Marijuana, classified as a Schedule I controlled substance, stands out on the list alongside heroin, ecstasy, LSD and peyote — drugs such as cocaine, fentanyl and meth are classified as Schedule II — meaning that the drug is defined to have no medical purposes in the United States and has high potential for abuse, (despite marijuana being legal and used for medical purposes once before from 1840 to 1900, and even now in 37 states).

“I am asking the Secretary of Health and Human Services and the Attorney General to initiate the administrative process to review expeditiously how marijuana is scheduled under federal law,” President Biden wrote. “This is the same schedule as for heroin and LSD, and even higher than the classification of fentanyl and methamphetamine — the drugs that are driving our overdose epidemic.”

Marijuana was listed in the Federal Narcotics Control Act of 1956 before being labeled a Schedule I controlled substance in 1970 where it has since remained. However, President Richard Nixon, who signed the Controlled Substance Act, enabled strong federal regulation, enforcement and penalties for those who use, possess and distribute the drug.

Nonetheless, there continue to be several debates surrounding the uses and consequences of marijuana: Whether or not it causes cognitive deficiency in the brain, if pregnant women can ingest it without harming their unborn child, and if it’s a gateway drug that leads to a darker path.

While studies always show that there are simply not enough studies to prove any of these cases one way or another, one find- ing that statistics have consistently shown is that the majority of users who are put in jail for marijuana charges lie within the Black community.

According to a 2020 report conducted by the American Civil Liberties Union (ACLU), Black people are more than 3x more likely to be arrested for marijuana possession than white people, (in some states, Black people are up to 10x more likely), a statistic that has remained unchanged since its 2010 report on the racial imbalance amongst marijuana arrests. The ACLU also noted that, “racial disparities in those arrests have not improved, and in some jurisdictions, they have worsened,” in every single state.

In spite of this, the ratio between Black and white people that are arrested are inconsistent, as well as the sentencing for those convicted.

Kevin Allen was sentenced to two 10-year prison terms after selling $20 worth of marijuana to a childhood friend, who was working as an informant for a narcotics task force in the area. Prosecutors then brought attention to Mr. Allen’s prior convictions in 2004, 2007, 2011 and 2014 of possession and intent to distribute before offering him a second 20-year plea deal. But Mr. Allen, who is a father of two and had a job at the time, turned down the plea deal, later regretting not taking the offer as his sentence was ultimately raised to life-without-parole.

Mr. Allen is not the only one.

But with America’s growing support for marijuana legalization, and President Biden’s recent executive order, some are hopeful that these are steps to decriminalizing the most commonly used federally illegal drug in the United States, and Biden calls for state governments to do the same.

Kassanda Frederique, executive director of the Drug Policy Alliance, stated, “We are thrilled to see President Biden holding true to his commitment to pardon every person with simple marijuana possession charges at the federal level, including people in D.C. And we are further encouraged by his efforts to get Governors to take similar actions at the state level.”

“This is incredibly long overdue. There is no reason that people should be saddled with a criminal record — preventing them from obtaining employment, housing, and countless other opportunities — for some- thing that is already legal in 19 states and D.C. and decriminalized in 31 states.”

Others believe President Biden’s pardon was an election tactic to increase future votes, especially among young and Black demographics, as the midterm elections draw near.

“The President, in his announced policy on marijuana, has waived the flag of surrender in the fight to save lives from drug abuse and has adopted all the talking points of the drug legalizers,” said Asa Hutchinson, the Republican governor of Arkansas. “Biden is simply playing election-year politics and sacrificing our national interest to win votes.”

Thus far President Biden’s pardons have changed the lives of 6,500 Americans who have been convicted of simple marijuana possession on a federal level. Though none currently remain in prison, 6,500 people are now able to apply for a job, rent an apartment and explore educational opportunities without the stain of a felony conviction on their record.