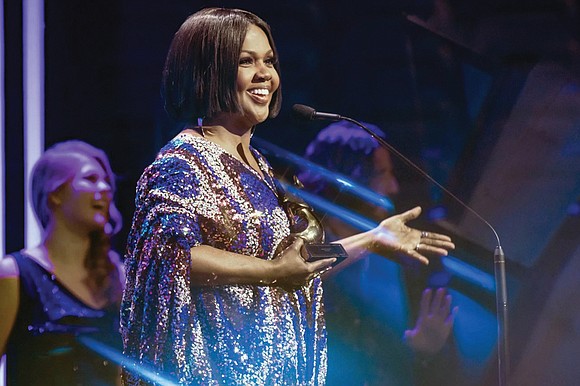 CeCe Winans, already a multi-Grammy-winning gospel singer, added a historic win at the 2022 GMA Dove Awards, the contemporary Christian music honors, becoming the first African-American female solo artist to be named Artist of the Year. She also won Song of the Year for “Believe for It,” the title track of her 2021 live recording.

As the applause subsided after the announcement of Artist of the Year, Ms. Winans broke into “To God Be the Glory” as her acceptance speech during the Oct. 18 ceremony of the Gospel Music Association that aired Friday on the Trinity Broadcasting Network.

“To God be the Glory for the things he has done,” she sang, and added: “God bless you. Thank you.”

Ms. Winans added in a written statement: “All I wanted for this record was for it to touch the hearts of people so they would be encouraged and filled with hope; but its success far exceeded all that I could have imagined. To God be the glory!”

Ms. Winans, 58, won Song of the Year for the track she co-wrote with Dwan Hill, Kyle Lee and Mitch Wong.

“It’s just amazing what God is doing, working with these guys, and grabbing songs that touch my heart,” she said in expressing thanks to her co-writers and producers on the album.

“I just want us to understand that the God of miracles is still working miracles. So keep believing for it.”

Ms. Winans is on the first leg of her 21-city tour for “Believe for It,” and is set to release her new book, “Believe for It: Passing on Faith to the Next Generation,” on Nov. 15.

Ms. Winans, the eighth of 10 children born to the Winans gospel music family, is the co-pastor, along with her husband, Alvin Love, of Nashville Life Church, a nondenominational congregation in Tennessee.

She won her first New Artist of the Year award with her brother, BeBe Winans, in 1988 — the same year she won her first of 15 Grammys — and now has more than two dozen Dove Awards.