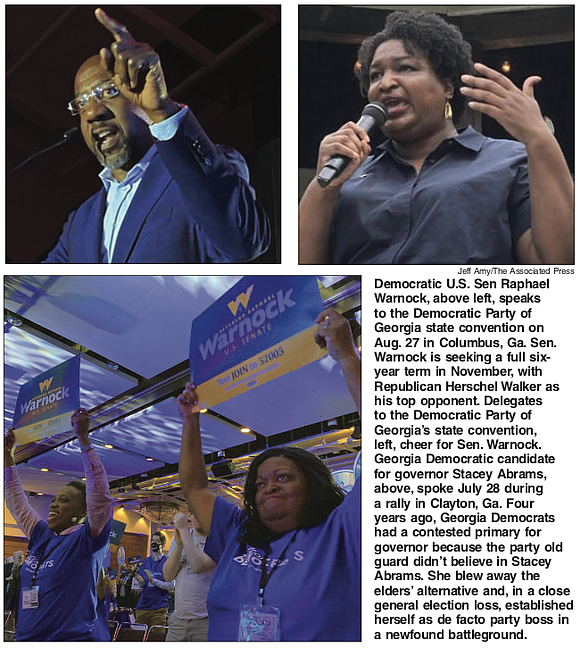 Columbus, Ga. - Four years ago, Georgia Democrats had a contested primary for governor because the party’s old guard didn’t believe in Stacey Abrams. She routed their alternative and, in a close general election loss, established herself as de facto party boss in a newfound battleground state.

That previewed 2020, when Joe Biden put Georgia in Democrats’ presidential column for the first time in 28 years, and Raphael Warnock and Jon Ossoff captured Senate seats soon after to give Democrats control on Capitol Hill. Now Ms. Abrams and Sen. Warnock top the Democratic ticket together for the first time as the party tries to replicate its success in a tough midterm election landscape. The outcome will again help determine the balance of power in Washington and whether Republicans retain their dominance in state government.

“We’re going to defy all the naysayers and take our state all the way back,” Ms. Abrams told delegates to the Democratic state convention on Aug. 27. “Georgia Democrats, we’ve got unfinished business to take care of.”

Yet Democratic leaders acknowledge that 2022 is not a simple replay of the last two cycles.

Ms. Abrams, in her governor’s race rematch with Brian Kemp, is not running against a little-known Republican secretary of state but a well- positioned incumbent. Sen. Warnock, no longer a political newcomer, is trying to distinguish himself from a relatively unpopular president who once campaigned for him. That’s a point that challenger Herschel Walker relentlessly seeks to make by criticizing Sen. Warnock as a rubber-stamp for the White House.

The rest of the Democratic ticket must run under the banner of a national party that controls Washington at a time of sustained inflation and an uncertain economy. And Democrats must retool their voter turnout operation to comply with tighter voting restrictions that Mr. Kemp and the Republican-led legislature enacted after Democrats’ 2020 victories.

The response, Democrats say, isn’t to run from their record but to embrace it, while portraying Republicans as an “extremist” party that advances an out-of-step cultural agenda and remains in thrall to former President Trump.

“The party of Trump is a party of extremism, a party of election deniers, a party of authoritarianism,” Charlie Bailey, the nominee for lieutenant governor, said ahead of the convention.

On stage Saturday, Mr. Bailey reminded delegates that his GOP opponent, Burt Jones, is among the fake electors who signed certificates falsely stating that the former president, not President Biden, had won their states. “If you seek to overthrow the United States government, you are not fit, you are not qualified to hold any office in this country,” Mr. Bailey said. “Make no mistake, this November democracy is on the ballot.”

The approach aligns with the national pitch that President Biden made Thursday at a cam- paign rally in Maryland, where he framed voters’ choice in November as being between Democrats and the Trump “MAGA movement,” a dominant strain of the GOP that Mr. Biden said resembles “semi-fascism.”

Mr. Kemp and Georgia’s secretary of state, Republican Brad Raffensperger, have garnered plaudits from moderate voters for bucking the Trump bid to overturn the 2020 election. But Ms. Abrams and others challenge the “moderate” label for either man.

Ms.Abrams criticizes Mr. Kemp as an “extremist” who signed a concealed carry law to loosen gun restrictions and a near-total abortion ban that bars the procedure after six weeks of pregnancy, before many women know they’re pregnant.

Bee Nguyen, a legislator challenging Raffensperger, hammers the secretary of state for his part in overhauling state voting procedures. Ms. Nguyen notes that Raffensperger, as a state law- maker, compiled a staunchly conservative record on abortion and guns, among other matters.

“We can build a Georgia where we believe in democracy,” Ms. Nguyen told convention delegates Saturday. “You can’t gerrymander the statewide seats.”

Georgia Democrats say the Supreme Court’s decision eliminating a constitutional right to access abortion, combined with Georgia’s near ban, is a critical enough issue to overcome swing voters’ worries about the economy.

“I’ll tell you that people are much more concerned about protecting their rights and their access to health care than anything else,” said attorney general nominee Jen Jordan, a state senator who has made her support of abortion rights a centerpiece of her bid.

Mr. Kemp blasts Ms. Abrams as a liberal who wants to “defund the police.” Ms. Abrams counters with proposals that would increase salaries for many law enforcement and criminal justice personnel. “Brian Kemp wants you to be afraid of me,” she says in one of her advertisements.

Mr. Jordan talks openly of crime increases but dismisses Republicans’ effort to cast it as “an Atlanta problem” — GOP framing aimed at white voters beyond the demographically diverse and heavily Democratic city.

“It’s not an urban problem or a suburban problem. It’s a Georgia problem, and the people who have been in charge have a lot to answer for,” Mr. Jordan said.

In the Senate campaign, Sen. Warnock has largely steered clear of President Biden, even as he embraces Democrats’ legislative victories. Sen. Warnock cites a pandemic relief bill and its child tax credit as critical aid to Georgia families. He cites benefits from a long-sought infrastructure package.

The senator acknowledges that gas prices and general inflation have spiked but notes that he called for a suspension of the federal gas tax and then won passage of a provision in the Democrats’ big climate and health care bill that caps the price of insulin for Medicare patients. Republicans blocked his effort to extend the cap to all consumers.

“Today we stand on this mountaintop together,” Sen. Warnock told Democratic delegates at their convention. “Tomorrow we go down in the valley until we cap the cost of insulin for everybody, until we lower the costs for all Georgians.”

Democrats hope the November electorate is at least as large as that on Jan. 5, 2021. Georgia requires a majority vote to win statewide office, and Libertarian candidates can draw enough to force a runoff.

With that in mind, Ms. Abrams, a Black woman from Atlanta, has spent a noticeable amount of time in rural, mostly white Georgia, where she lost ground in 2018 compared with Democrats’ performances in previous midterms. Ms. Jordan, who is white, notes that she grew up in small-town south Georgia but now represents a suburban Atlanta state Senate district that had been a Republican lock. Abrams sometimes campaigns alongside Mr. Bailey, a white man with a pronounced Southern accent and small-town Georgia roots. Ms. Nguyen tells of her parents fleeing Vietnam as political refugees.