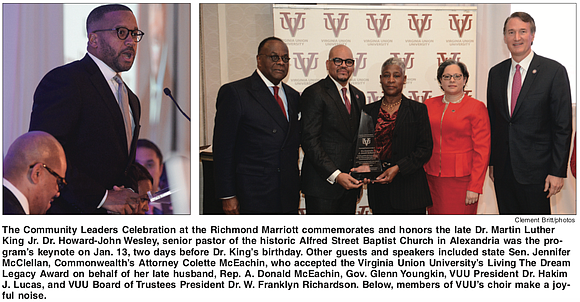 The annual early morning breakfast gathering, hosted by VUU and Living the Dream Inc., truly was an occasion to commemorate and honor the Jan. 15 birthday of Dr. Martin Luther King Jr., who died at the hands of an assassin in 1968. Dr. King’s dream before his death, espoused freedom, education, equal rights and voting rights. His dreams were revived by the riveting Dr. Howard-John Wesley, senior pastor of the historic Alfred Street Baptist Church in Alexandria.

Hailed as one of the most prolific and prophetic voices of justice and grace in modern times, Dr. Wesley has led community protest marches against the New York grand jury’s 2014 decision not to indict an NYPD officer whose choke-hold led to the death of Eric Gardner.

His sermon “After Trayvon” was acknowledged by Time magazine’s July 29, 2013, cover story as one of the best sermons preached in the United States after the “not guilty” verdict in the State of Florida v. George Zimmerman. Zimmerman fatally shot 17-year-old Trayvon Martin in 2012.

Dr. Wesley’s message to the CLC attendees focused on the biblical town Ai, located in central Canaan, which is noted for “being the scene of a humiliating Israelite defeat as the small city of Ai routed the Israelites and inflicted three dozen casualties.”

Weaving in multiple Ai analogies to today’s political and social climate, Dr. Wesley drew standing rounds of applause and “amens” as he exhorted that it is time to get on the battlefield.

“There comes a moment when it has to be about more than religion ... it’s got to be about your politics,” Dr. Wesley preached.

Positioning himself several inches from his microphone, he surveyed the Marriott ballroom and the special guests seated near him on the dais when driving home his point.

The Living the Dream Legacy Award was presented posthumously to A. Donald McEachin. The late congressman’s widow, Collette W. McEachin, accepted the award.