Thornton, Nelson to lead Henrico Board of Supervisors in 2023 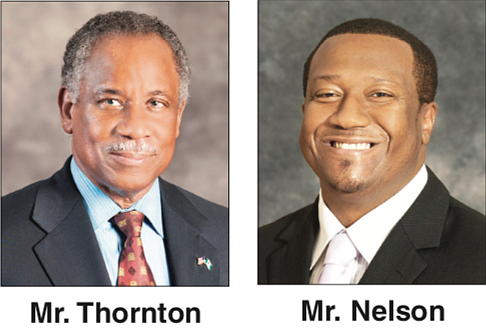 Mr. Thornton is wielding the chairman’s gavel for the sixth time, having held the post most recently in 2018. He succeeds Tuckahoe District Supervisor Patricia S. O’Bannon as chairman after serving as vice chairman in 2022. First elected to represent Fairfield in 1995, Mr. Thornton is serving his seventh term on the county’s board.

In remarks following his election, Mr. Thornton invited his wife, Bettye, to stand alongside him, as she had done when he accepted the chairmanship in 2000. He also noted he was sporting the same gold necktie with maroon squares that he had worn on that night 23 years ago.

“One of the pillars of our democratic system is local government,” Mr. Thornton said after thanking his colleagues for their trust in him and for always working together with respect and collegiality. “During this age of technology as well as information, disinformation and misinformation, we must work even more diligently in serving our citizens. We must continue to use technology but use it wisely and to use more data-driven modalities in our governance.”

A Richmond native, he is a co-founder and past president of the Henrico County Civic League. He earned a bachelor’s degree from Virginia Union University and a master’s degree from American University. He retired in 2014 after working more than 40 years at VUU, where he was a professor of French and a recipient of the university’s Teacher of the Year award. He also received the John Jasper Trailblazer Award from Sixth Mount Zion Baptist Church in Richmond.

Mr. Nelson, first elected Varina District supervisor in 2011, is in his third term on Henrico’s board. He previously served as chairman in 2016 and 2019.

He serves various national, state and local governmental and community organizations, including as chairman of the Greater Richmond Transit Company Board of Directors, treasurer of the Capital Region Airport Commission and as a member of the Richmond Region Planning District Commission, Richmond Metropolitan Transportation Authority Board of Directors and Virginia Commonwealth University (VCU) Board of Visitors.

Mr. Nelson, who grew up in Varina, earned a master’s degree from the Samuel DeWitt Proctor School of Theology at VUU, a bachelor’s degree in business administration from VCU and an associate degree in business from J. Sargeant Reynolds Community College. He is the pastor of Sixth Mount Zion Baptist Church.

The Board of Supervisors typically meets at 7 p.m. on the second and fourth Tuesday each month. Meetings usually are not held on the fourth Tuesday in August and December. Meetings are held in the Board Room at the Henrico County Government Center, 4301 E. Parham Road, and are livestreamed through the Board of Supervisors webpage. Additional information, including archived videos of meetings, is available online.