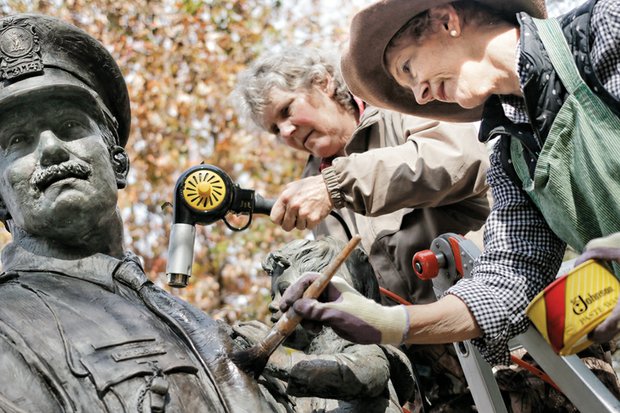 Lynda Solansky, left, and sculptor Maria J. Kirby-Smith clean the bronze Richmond Police Memorial statue in Nina F. Abady Festival Park beside the Richmond Coliseum.
Ms. Kirby-Smith created the 8½-foot-tall statue that was placed in 1987 and pays homage to city police officers and the 28 killed in the line of duty between 1869 and 2003. A private foundation paid for the statue that depicts an officer carrying a child down steps. The artist and her friend drove up from South Carolina to wash and wax the statue Tuesday, possibly the statue’s first cleaning since it was dedicated 28 years ago.
The cleaning was done ahead of a wreath-laying ceremony that Mayor Dwight C. Jones will lead Tuesday, Nov. 24, according to retired Officer Glenwood W. Burley, the statue’s protector. He’s now leading a push to win city approval to move the statue from its home on the 7th Street side of the park to The Carillon area of Byrd Park.
The Carillon Civic Association, which represents people living next to the park, has publicly expressed opposition, arguing the statue would be out of place and urging city leaders to find a more suitable location.