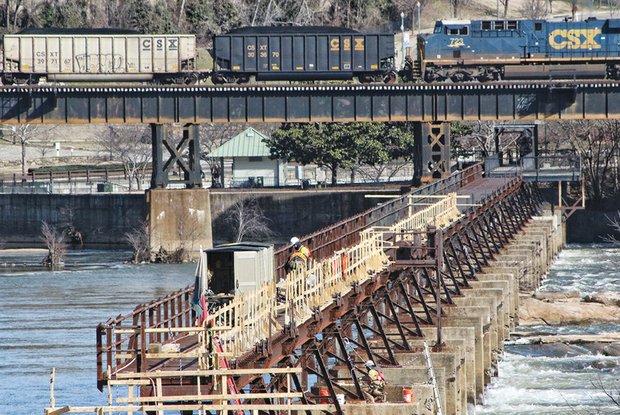 Cityscape
Slices of life and scenes in Richmond
This view, looking north toward Brown’s Island, shows the work underway on the 1,600-foot T. Tyler Potterfield Memorial Bridge that will allow pedestrians and bicyclists to cross the James River. The bridge, in pieces for years, sits above the former Brown’s Island Dam. The city has set aside more than $5 million since 2013 and has received $2.5 million from the state to develop the bridge. The project is expected to be completed in August and open sections of the river to walkers and cyclists. Howard Shockey & Sons Inc. is undertaking the work to provide the first non-vehicle connection between the south and north banks of the river. A connection between the bridge and the floodwall walk will be created on the south end of the bridge. The bridge is named in honor of a deceased city employee who championed com- munity development.