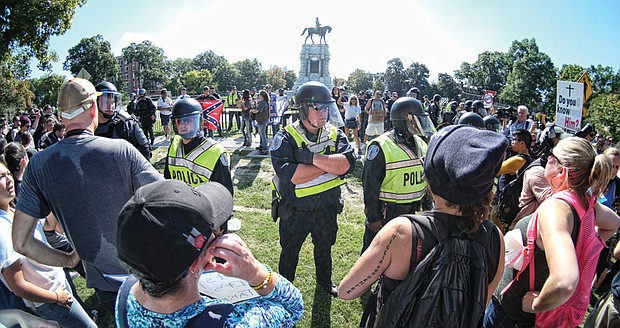 Richmond police officers in riot gear separate counterprotesters from neo-Confederates on the west side of the Robert E. Lee monument. The small number of Confederate statue supporters was vastly outnumbered by hundreds of counterprotesters.

A potentially volatile “Heritage Not Hate” rally led by a neo-Confederate group turned into a war of words Saturday as the small, but armed band found itself outnumbered by hundreds on Richmond’s Monument Avenue. The Tennessee-based group, CSA II: The New Confederate States of America, called the rally to show their support for the statue of Confederate Robert E. Lee as city leaders wrestle with whether the Confederate monuments on the tree-lined street should be removed or left up “with context.”