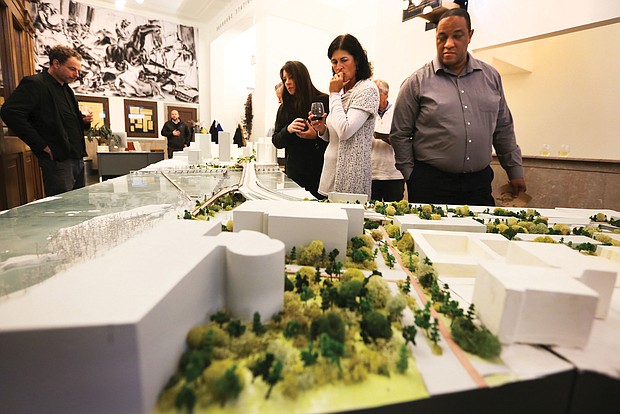 People check out a 28-foot model of an envisioned park that would span the James River. The Richmond BridgePark Foundation unveiled the model last Thursday at a Broad Street venue. The area would include trees to help make it feel more like a park. As yet there is no funding for BridgePark, which would cost millions of dollars to create. The proposal was inspired by a similar walking bridge, the High Line, in New York City. One proposal calls for BridgePark to use the still visible piers of a bridge that was toppled in a past flood. The proposed bridge would link Kanawha Plaza in Downtown to the Manchester Climbing Wall in South Side and fit between the Manchester Bridge that links 9th Street to South Side and the new pedestrian T. Tyler Potterfield Memorial Bridge that connects Brown’s Island on the north bank of the James River to Manchester on the south bank of the river. (Regina H. Boone/Richmond Free Press )