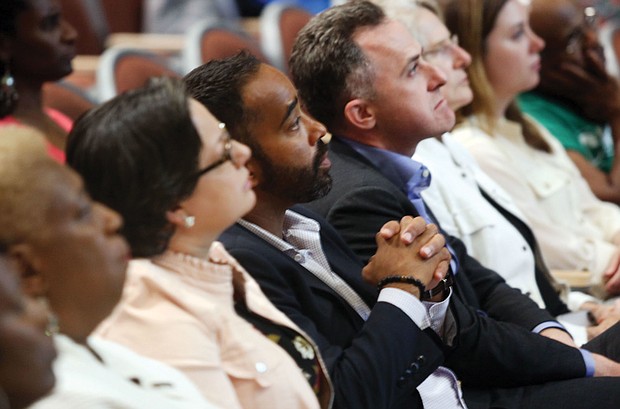 Cityscape-Slices of life and scenes in Richmond-
On Aug. 28, 1963, Dr. Martin Luther King Jr. electrified the nation with his “I Have a Dream” speech calling on the country to live up to ideals of equality and end the oppression of black people. On Tuesday, Richmonders commemorated the 55th anniversary of the March on Washington for Jobs and Freedom, where the speech was delivered, during a program at Martin Luther King Jr. Middle School in the East End. During the program, all eyes are on a video of Dr. King delivering his famous speech. Watching, from left, are: Richmond state Sen. Jennifer L. McClellan, Richmond Delegate Jeff M. Bourne and Richmond Public Schools Superintendent Jason Kamras.(Regina H. Boone/Richmond Free Press)