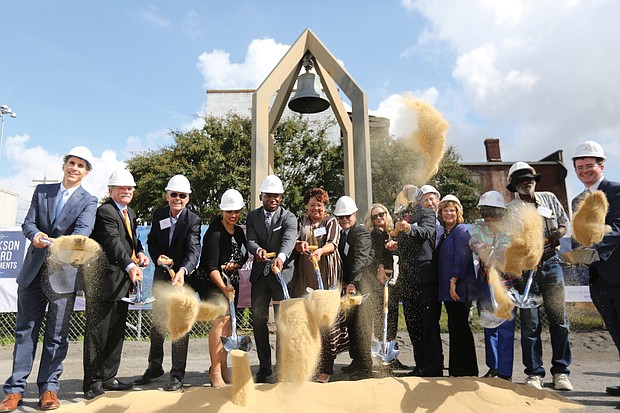 Mayor Levar M. Stoney, center, is flanked by City Council members Kim Gray, center left, and Ellen Robertson as he leads the official groundbreaking Tuesday for a $34 million apartment complex going up on the former site of St. Joseph’s Catholic Church at 1st and Jackson Streets in Jackson Ward. The bell in the background is the last remnant of the long demolished church that at one time was the first Catholic church in the country built for a black congregation. When completed, the complex is to include 154 units, with 72 to be set aside for current residents of Fay Towers, which is being vacated. Also taking part are representatives of the development partners the Richmond Redevelopment and Housing Authority and the Community Preservation and Development Corp., as well as those of other participating public agencies and private companies.

The heat is finally working in all 411 public housing units where serious problems occurred last winter, according to the Richmond Redevelopment and Housing Authority. That includes 78 units in Creighton Court, where new baseboard heat was installed and 333 units where radiators were repaired or replaced.