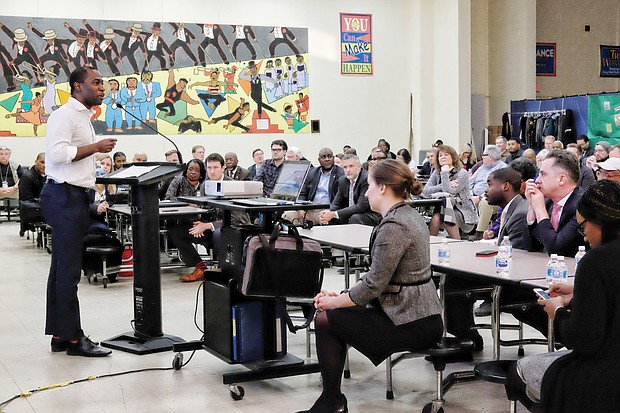 Stumping for his budget:
Mayor Levar M. Stoney calls for support of his plan to raise taxes to generate more money for schools and street paving. He was speaking Tuesday night at Woodville Elementary School, the first of four town hall meetings designed to garner community support on the budget plan. Mayor Stoney got little pushback from an audience of 70 people that was composed largely of city and public schools employees, including Richmond Public Schools Superintendent Jason Kamras, second from right. Several residents, however, expressed concern that the tax increase would be a way to ensure adequate funding for replacement of the Richmond Coliseum. Mayor Stoney responded that the Coliseum project is not mentioned in the budget, nor is the Coliseum proposal ready to present to City Council. (Sandra Sellars/Richmond Free Press)