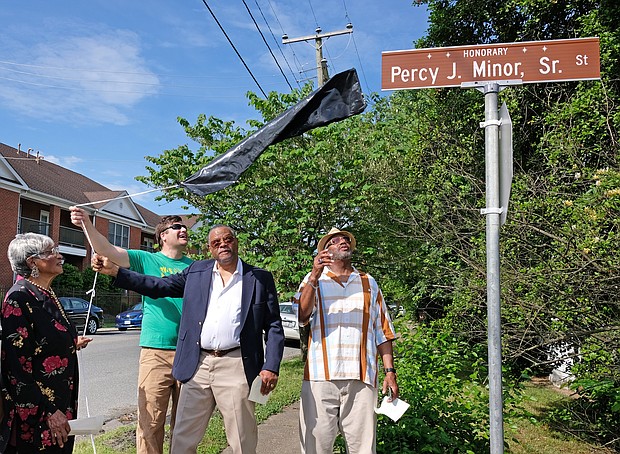 Cityscape- Slices of life and scenes in Richmond/A quartet joins in unveiling a tribute street sign Saturday to the late Percy J. Minor Sr. in honor of his commitment to revitalizing the city’s Swansboro neighborhood. From left, Mr. Minor’s widow, Mozelle Minor; 5th District City Councilman Parker Agelasto; and Mr. Minor’s sons, Percy Minor Jr. and Cecil Minor, remove the covering to reveal the honorary street sign at Bainbridge and 25th streets. Mr. Agelasto proposed the sign to pay tribute Mr. Minor, who advocated for Swansboro as president of the civic association. An ordinance passed by City Council credits Mr. Minor, who died in 2013, with pushing for development of more housing for retirees and other improvements. The ceremony was followed by a neighborhood cleanup led by Mr. Agelasto. (Sandra Sellars/Richmond Free Press)