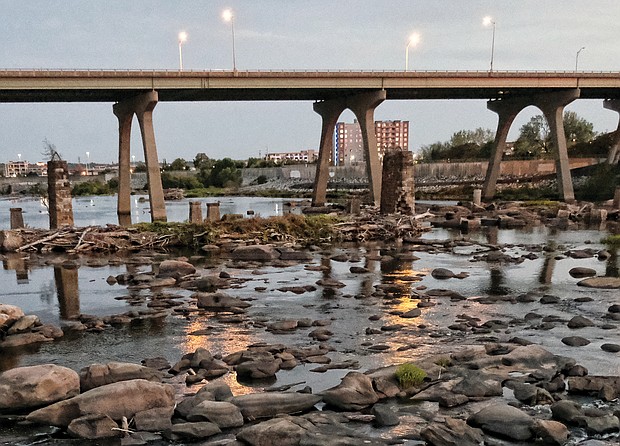 Rocks typically covered by the rushing waters of the James River are now visible because of low water levels. This view of the river, taken Tuesday evening near the Manchester Bridge, is emblematic of the severe drought that has gripped much of Virginia in the past two months.
The river has dropped below four feet in height and its flow is below normal, according to the U.S. Geological Survey, which monitors the James River. The rain last Sunday was welcome, but its impact had dissipated within two days, the USGS data show. More rain on Wednesday also provided relief, but experts indicate it will take regular rain to make up the deficit in moisture that has developed. Some areas of the state are reportedly seven inches below normal rainfall levels. Concerned about the river that is a main source of drinking water for the Richmond area, city and county public utility departments are urging area residents to take voluntary conservation efforts, including reducing watering lawns and washing vehicles.

Rocks typically covered by the rushingwaters of the James River are now visible because of low water levels.