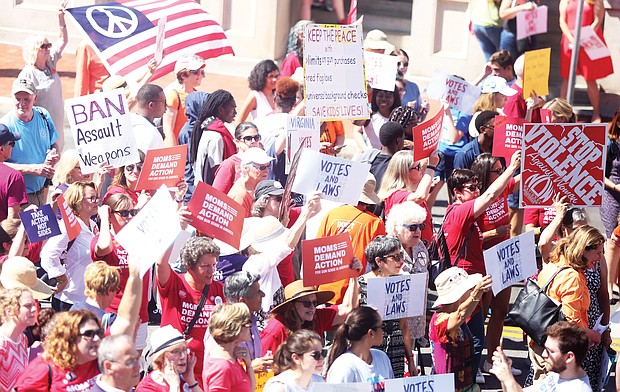 Supporters of tougher gun laws in Virginia wave signs and banners during a rally in July at the Bank Street entrance to the State Capitol before a special General Assembly session called by Gov. Ralph S. Northam to deal with gun violence in the wake of the shooting death of 9-year-old Markiya Dickson in Richmond and the mass shooting in Virginia Beach that left 12 dead. The Republican-led General Assembly adjourned, however, without considering the governor’s package of bills.

The past 12 months have seen a lot of highs and lows, with the Richmond Free Press there documenting events and life in and around Richmond.

The past 12 months have seen a lot of highs and lows, with the Richmond Free Press there documenting events and life in and around Richmond. Photographers have captured through their work many of those ups and downs — from the newly named Arthur Ashe Boulevard to blackface and sex scandals that struck the state’s top three officials. Here are photos of some of the highlights of 2019.