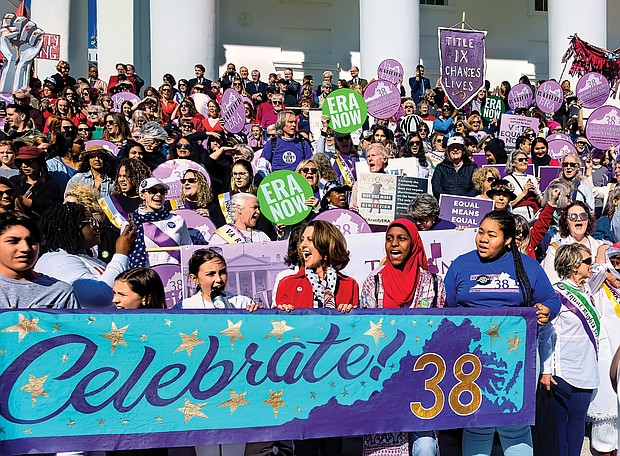 Last Sunday hundreds of women and their supporters, including First Lady Pam Northam, center, celebrate Virginia being the 38th state to ratify the Equal Rights Amendment. The event, Celebrate! 38, included a rally, speakers and a march from Monroe Park to the State Capitol on March 8, International Women’s Day. Thanks to a Democratic majority in the General Assembly for the first time in more than two decades, the ERA was approved in January. Thirty-eight states are needed to ratify any amendment to the U.S. Constitution. But the ERA’s future is uncertain, in part, because the 1982 deadline for ratification enacted by Congress was not met. Attorneys general from Virginia and other states have filed a lawsuit arguing that the deadline was not binding and seek to force federal officials to adopt the measure that would guarantee women equal rights under the law. Speakers at last Sunday’s rally included Kate Kelly, a human rights attorney at Equality Now; Kamala Lopez, founder and co-director of Equal Means Equal; Liza Mickens, the great-great-granddaughter of the renowned banker and women’s empowerment advocate Maggie L. Walker; and Andrea Miller, executive director of the Poor People’s Campaign of Virginia.