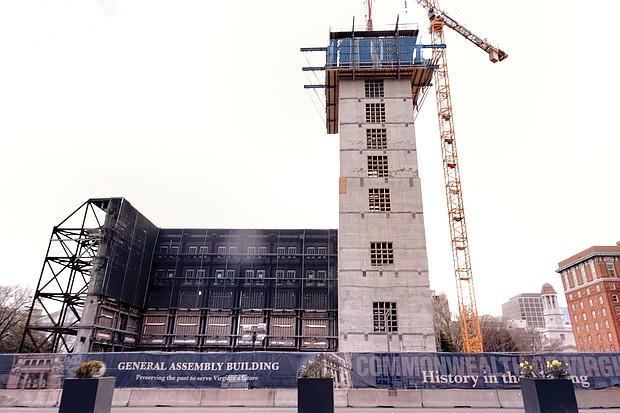 Construction continues on the new General Assembly Building going up at Capitol Square at 9th and Broad streets in Downtown. The 15-story building that will house offices for the 100 members of the Virginia House of Delegates and 40 state senators, along with committee hearing rooms, is expected to be completed in 2021. More than $300 million is being poured into the project, which includes renovation of Old City Hall that sits next door to the east and construction of a 500-car parking deck. This new legislative building was to be ready this year. However, the development hit a two-year roadblock during the tenure of former Gov. Terry McAuliffe, who sought to use the project as a bargaining chip in an unsuccessful attempt to get the Republican-controlled legislature at the time to approve expansion of Medicaid. The project regained momentum in 2017 in the final year of Gov. McAuliffe’s term. Medicaid expansion was approved after Gov. McAuliffe left office in January 2018.