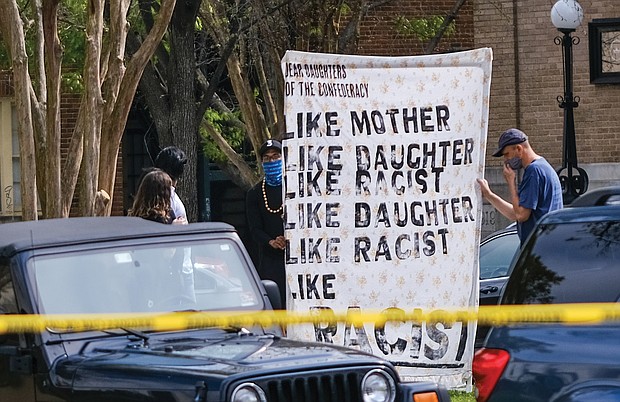 Anti-racist demonstrators hold a banner Saturday outside the headquarters of the United Daughters of the Confederacy on Richmond’s Arthur Ashe Boulevard. The two said they are not affiliated with the White Lies Matter group that claimed responsibility for stealing a Confederate chair from a Selma, Ala., cemetery in March and then demanding the UDC post a banner at the Richmond headquarters on April 9, the anniversary of the Confederate surrender at Appomattox, ending the Civil War. The two demonstrators had their own message for the UDC.

The stolen chair dedicated to Confederate President Jefferson Davis has been recovered in New Orleans, and the owners of a tattoo parlor in the “Big Easy” have been arrested on related felony charges, though their attorneys are calling their arrests “a mistake.”