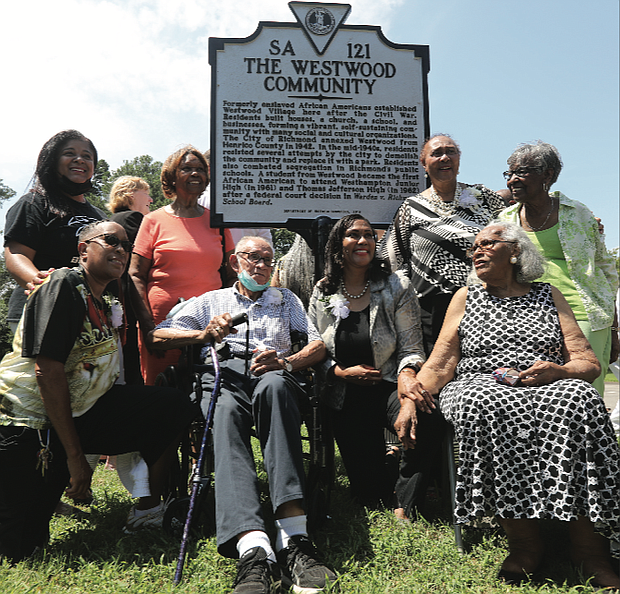 Current and former residents of Westwood celebrate last Sunday a new state historical marker honoring the community in Richmond’s West End that was started by formerly enslaved people following the Civil War. Location of marker: Willow Lawn Drive and Dunbar Street.
Residents built homes, a church, a school and businesses, as well as social and cultural organizations in the community that originally was a part of Henrico County. It was annexed to Richmond in 1942 and residents later successfully fought attempts by city officials to demolish the community and replace it with a public park. Westwood Baptist Church remains the most prominent landmark. Kathleen Hopkins Valentine, 93, seated at right, is the oldest resident living in Westwood. She said she and her family moved when she was 4 from Philadelphia to what was then called Westwood Village. Others pictured here are, from left, Kelly Johnson Crowder, whose mother, Jane Cooper Johnson, integrated Westhampton Junior High and Thomas Jefferson High School in the early 1960s; Charlene Hopkins, kneeling, and Frances Bush Jones, both cousins of tennis great Arthur Ashe Jr., whose grandparents lived in Westwood; Warrick Taylor, a former Westwood resident; Norfolk State University professor Dr. Colita Nichols Fairfax, immediate past chair of the Virginia Board of Historic Resources, kneeling, and her mother, Brenda Dabney Nichols, who was born and raised in Westwood; and Lennie Anderson Thornton, a former Westwood resident. The Friends of Westwood Playground paid for the marker.