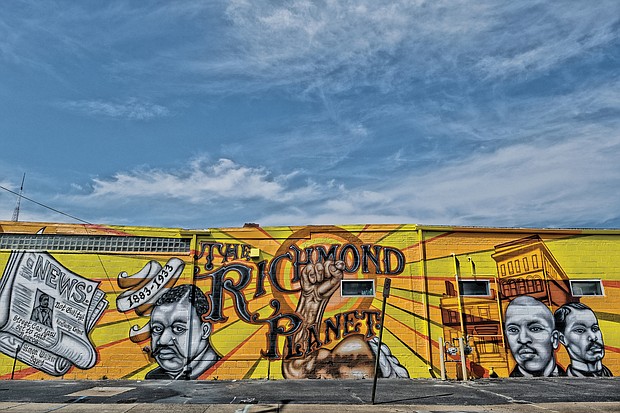 Cityscape-Slices of life and scenes in Richmond/Richmond muralist Hamilton Glass created this new tribute to legendary Richmond journalist John Mitchell Jr. and the spirited Richmond Planet newspaper through which he battled lynching, segregation and Black oppression and promoted racial pride from 1884 until his death in 1929. Born enslaved, the “fighting editor” also started and ran a bank in Richmond and represented the Black community at City Hall as an elected member of the government. Significantly, this artistic homage is located miles from the historically Black Jackson Ward neighborhood in which Mr. Mitchell lived and worked. Location: The 1200 block of Myers Street, a short connector between Leigh Street and Arthur Ashe Boulevard on the doorstep of Scott’s Addition. The building is home to Tilt Creative + Production Studios, whose front door faces the boulevard.