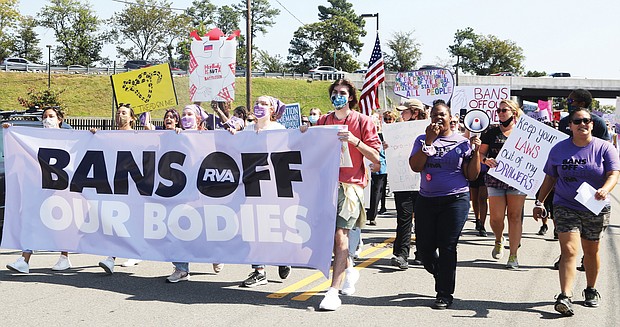 Marching to beat the bans-Hundreds of women and their advocates, including Kristin Rodriguez, 40, took to the streets last Saturday for the Bans Off Our Bodies RVA rally and march to show their support for a woman’s right to make her own decisions when it comes to abortion. The Richmond rally was one of scores held across the country last weekend in advance of the U.S. Supreme Court’s new session that began Monday in which a case challenging abortion rights will be heard. That case, out of Mississippi, is expected to be argued Dec. 1, and has the potential to overturn Roe v. Wade, the landmark 1973 case that guaranteed women the constitutional protection of being able to choose to have an abortion without excessive government restriction. Texas recently passed a law that also would ban abortion after six weeks, a timeframe when many women don’t know whether they are pregnant. In Richmond, speakers urged people to work to protect women’s reproductive freedom. The rally was held at Diversity Richmond, followed by a march down Sherwood Avenue to Hermitage Road. Ida Allen, who led chants with the bullhorn during the march, was a lead coordinator of the event.