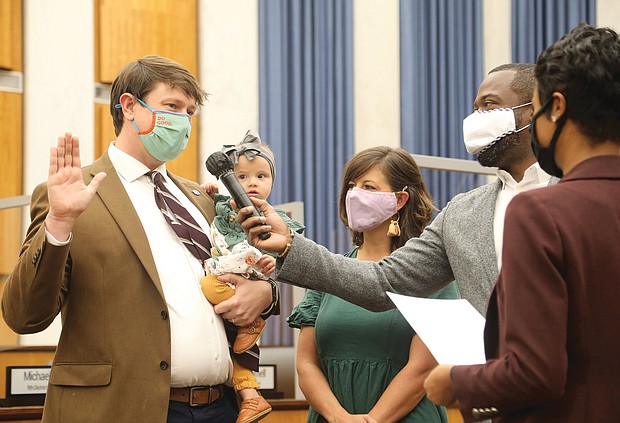 It’s official: J.E. Lincoln Saunders is now the chief administrative officer or No. 2 official at City Hall after Mayor Levar M. Stoney. Mr. Saunders, holding his year-old daughter, Story Hall-Saunders, and accompanied by his wife, Ashley Hall, is sworn in Tuesday by City Clerk Candice D. Reid, after City Council unanimously consented to the appointment by Mayor Stoney, holding the microphone. Mr. Saunders had been the acting CAO for nearly 11 months after his predecessor, Lenora Reid, suffered a stroke last year. In late August, Mayor Stoney announced Mr. Saunders as his choice to permanently fill the role after Ms. Reid formally retired. Mr. Saunders is to be paid nearly $200,000 a year. He has received mostly high marks since taking on the top administrative post that is essentially equivalent to city manager. He is the mayor’s most trusted confidante, having served as the mayor’s chief of staff during Mayor Stoney’s first four-year term.