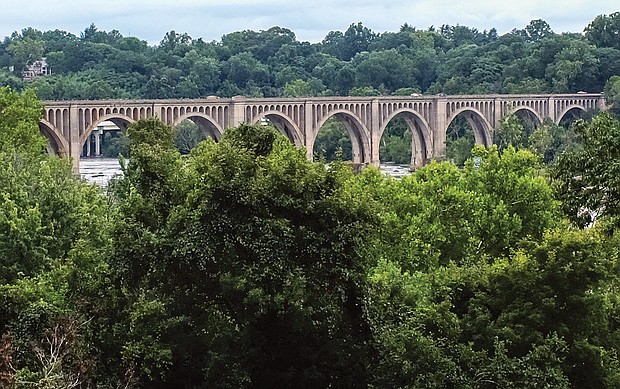 Cityscape:Slices of life and scenes in Richmond/This elegant Richmond railroad bridge over the James River has stood the test of time. Woodrow Wilson was still president, the prohibition of liquor begins and the raging pandemic “Spanish flu” was killing millions of people when the Richmond, Fredericksburg & Potomac and CSX-predecessor Atlantic Coastline railroads built the structure in 1919. Location: Between the Boulevard and Powhite Parkway bridges. Legendary engineer John E. Greiner designed the iconic arched bridge that was among the first rail bridges to be made of poured concrete. Dubbed the “million-dollar bridge,” the double-track bridge allowed trains to move through Richmond more quickly and to cross east-west rail lines that ran along both sides of the river. Considered an engineering marvel, the bridge continues to draw admirers.