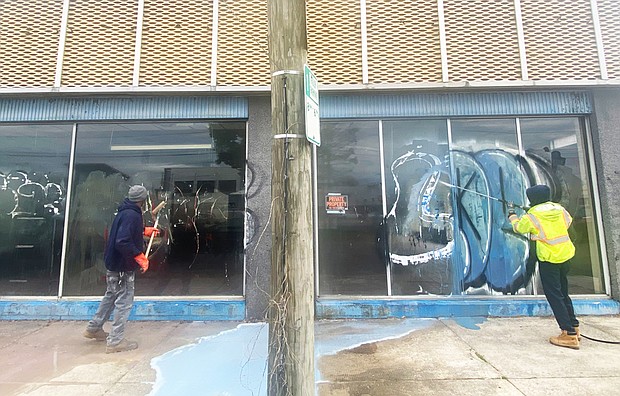 City workers Zachary Smith and D’Jermaine Layne remove graffiti from a building in the 2900 block of West Broad Street that a city official described as an “eyesore in the middle of the city.” Mr. Smith and Mr. Layne are part of a Richmond Department of Public Works crew that focuses on eliminating unwanted scribbles, initials and messages spraypainted in public spaces and on public and privately owned buildings. The department currently deploys two teams of six people and is now assembling a third team to expand the effort, according to Bobby Vincent, director of the Department of Public Works. Mayor Levar M. Stoney visited the project Monday to spotlight the department’s efforts to remove graffiti and to show that the city is committed to this seemingly never-ending effort to keep buildings spruced up. Mr. Vincent reported that the crews already have removed graffiti from 1,000 locations since July 1, double the number from the same period in 2020-21. His hope is that the dedicated crews can deal with at least 1,500 locations by June 30 and do even more locations next year. In addition, the department is contacting building owners to get them involved in this ongoing initiative. “We want to be able to clean up,” he said, but he also noted that owners need to take responsibility for tackling the problem as well.